The first issue of Tintin magazine, which starred Hergé's famous reporter, appeared in1946. By the mid-1950s it was well established and had grown from 12 pages to 32. It was also published in separate editions for France, Belgium, Switzerland, the Netherlands and Canada. Most strips in the magazine would occupy a single page and would later be reprinted in album form. I've found a number of examples from 1955 where scuba-diving was featured and I'll be sharing some of them here (Rest assured I'll be searching through other years to see if I can find more goodies to share in future blogs).

During this period the magazine would begin with a four page story, usually historical, that also featured on the front cover. Here are the covers from two such stories illustrated by René Follet (b1931) and Jean Graton (b1923) respectively. 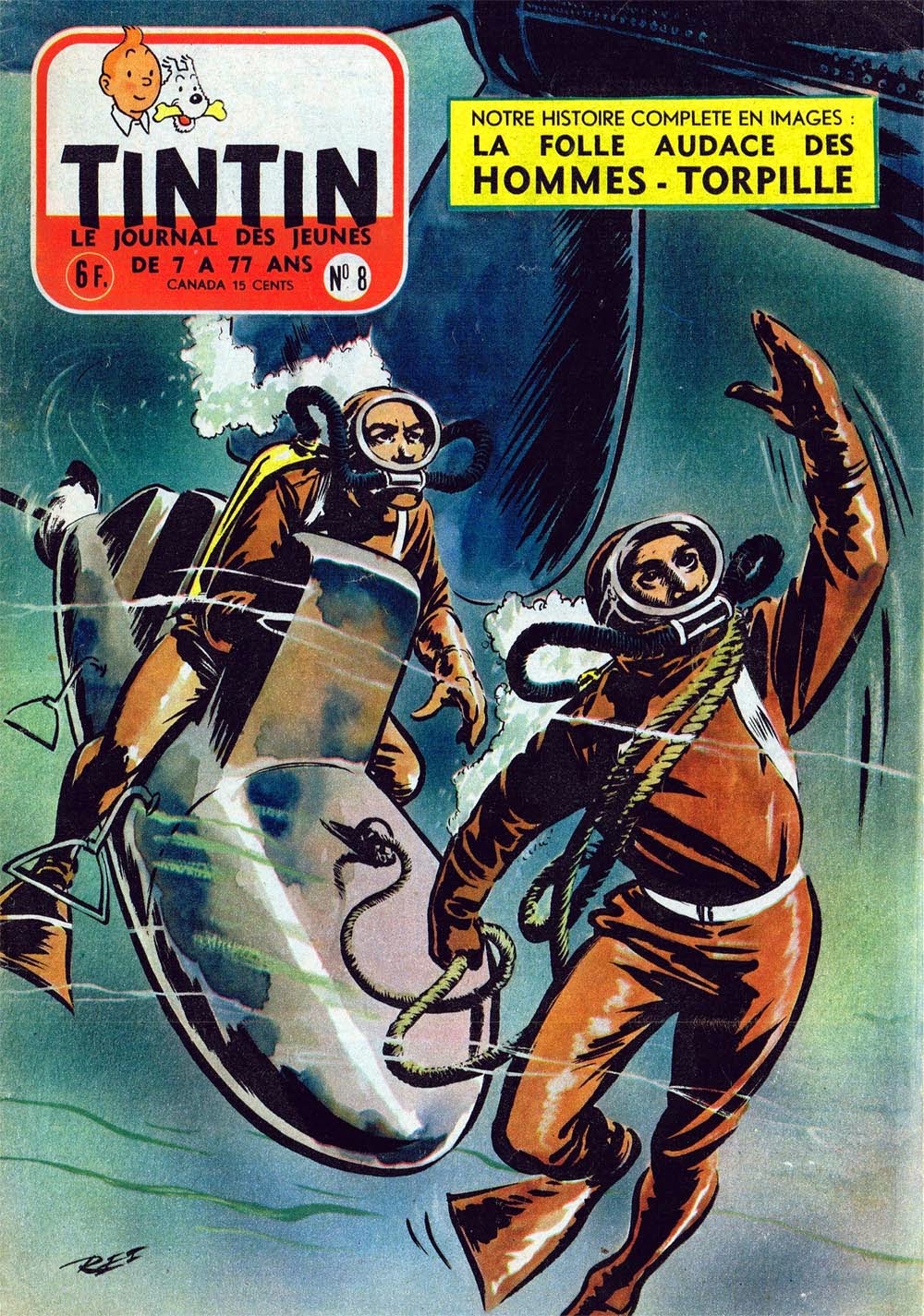 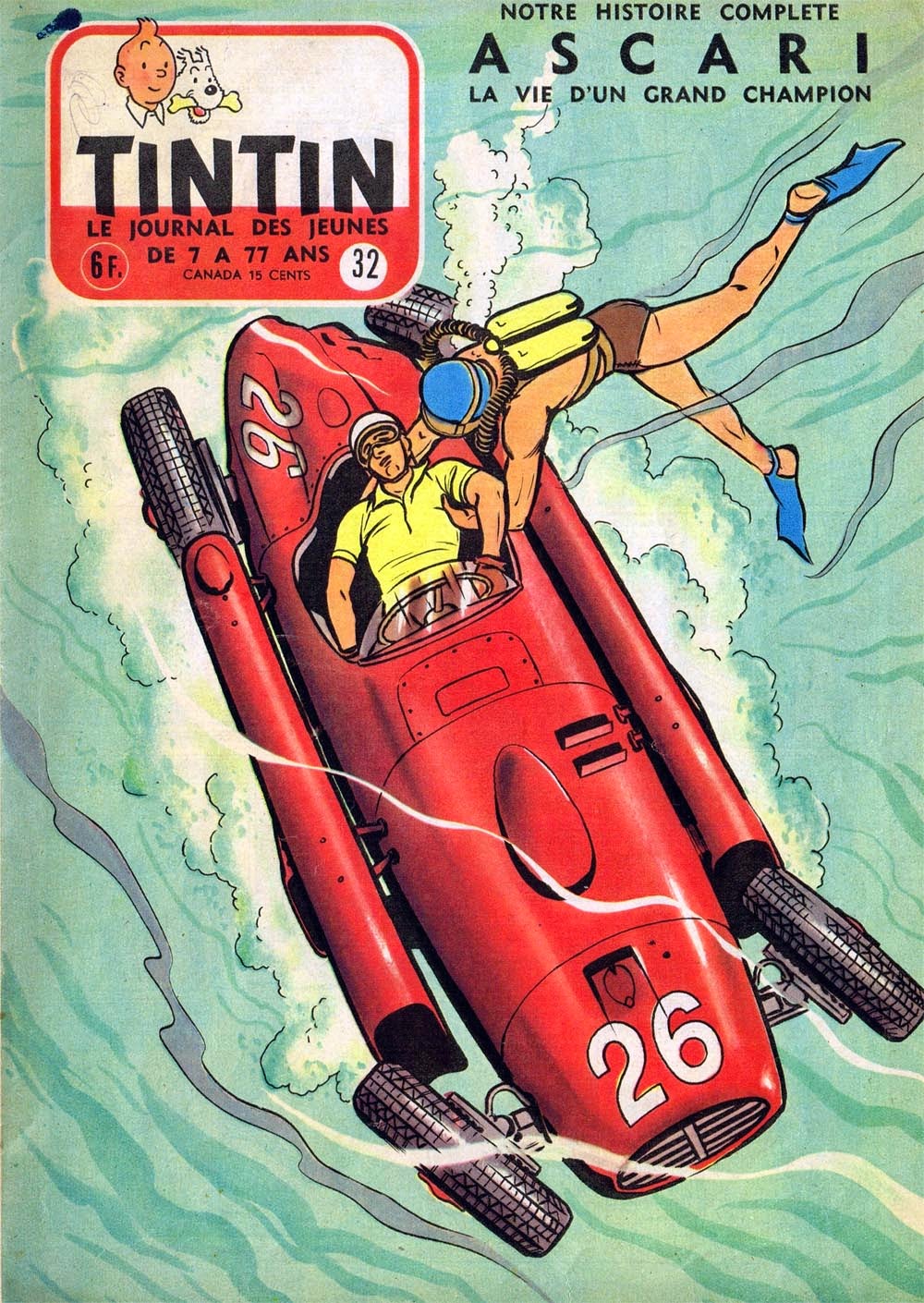 The second example features an incident that had happened to Italian racing driver Alberto Ascari only a few months earlier. During a race in Monaco he lost control and crashed into the harbour. Although he survived on that occasion he was killed four days later in another accident at Monza in Italy. Artist Jean Graton is best known for drawing the adventures of his own racing driver Michel Vaillant.

Next up is an advertising strip for Helva Watches. The young diver wonders why the fish are staring at him before realising they're looking at his watch.

Dan Cooper was a Canadian test pilot and The Blue Triangle was the first story in his 50+ year history. Over 40 albums have been published and the strip was written and drawn by Albert Weinberg (1922-2011). Here we see Dan searching for wreckage from a recent crash that occurred during tests of a new plane, the Blue Triangle. As often seems to happen in comics, a pesky shark comes along! 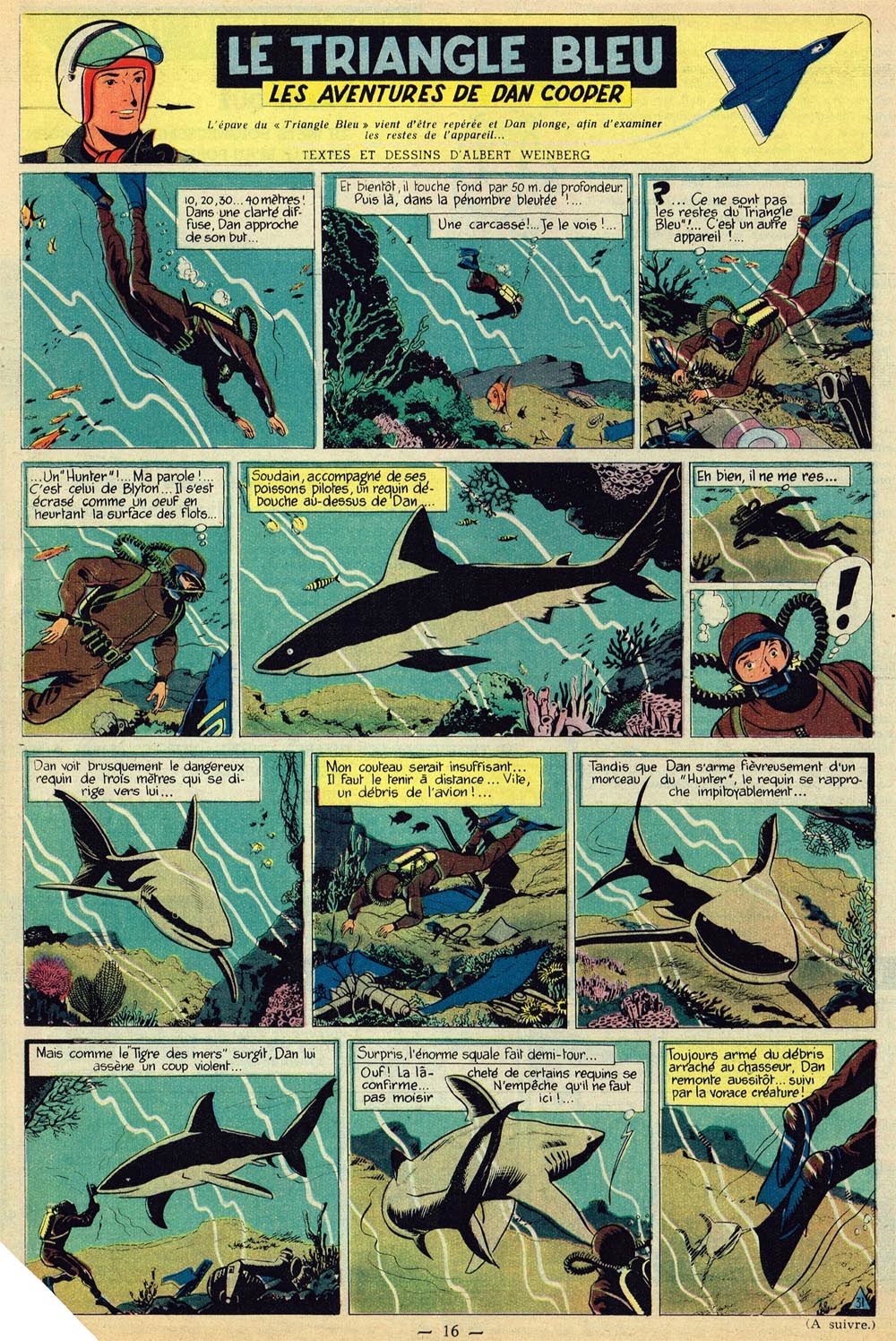 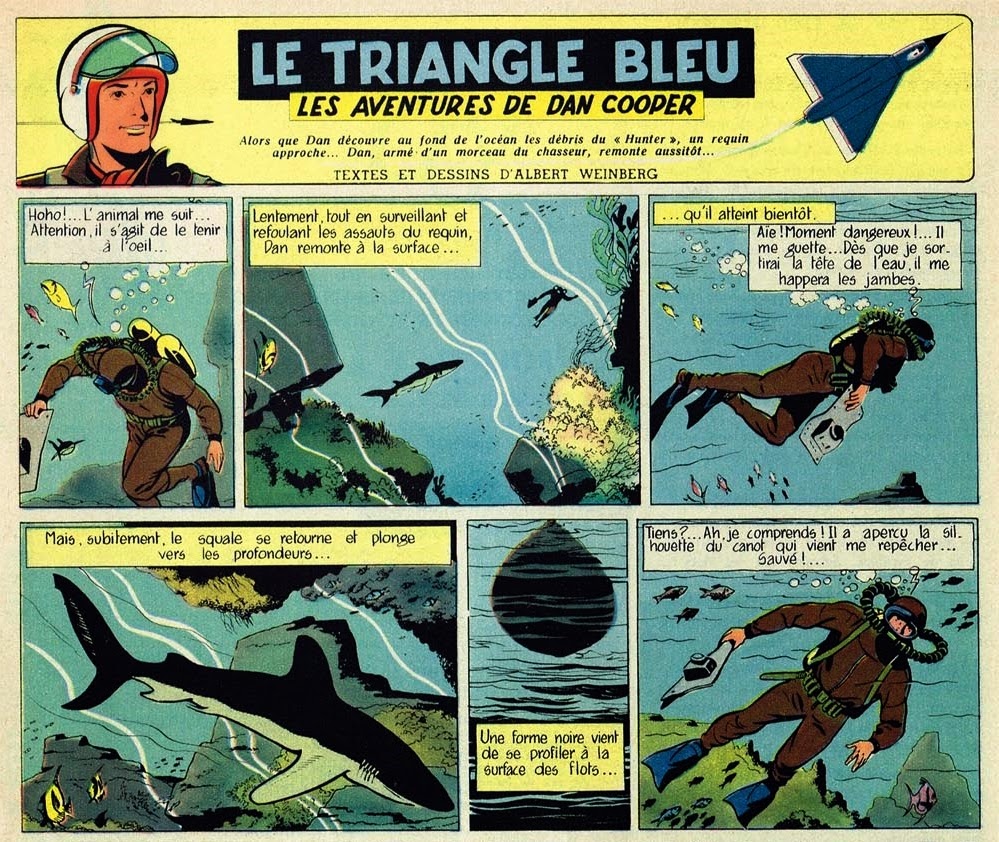 Our final examples come from the long running adventures of Suske en Wiske although here they are known as Bob et Bobette (They were also known as Spike and Suzy in Britain and Willy and Wanda in the United States). Created by Willy Vandersteen (1913-1990) for the Flemish newspaper De Nieuwe Standaard in 1945, their popularity soon grew and Vandersteen was approached by the publishers of Tintin in 1948. The characters appeared there for the next 11 years. At Hergé's request Vandersteen adapted his artistic style to follow the Ligne Claire (Clear Line) style that he had pioneered and was adopted by many others. 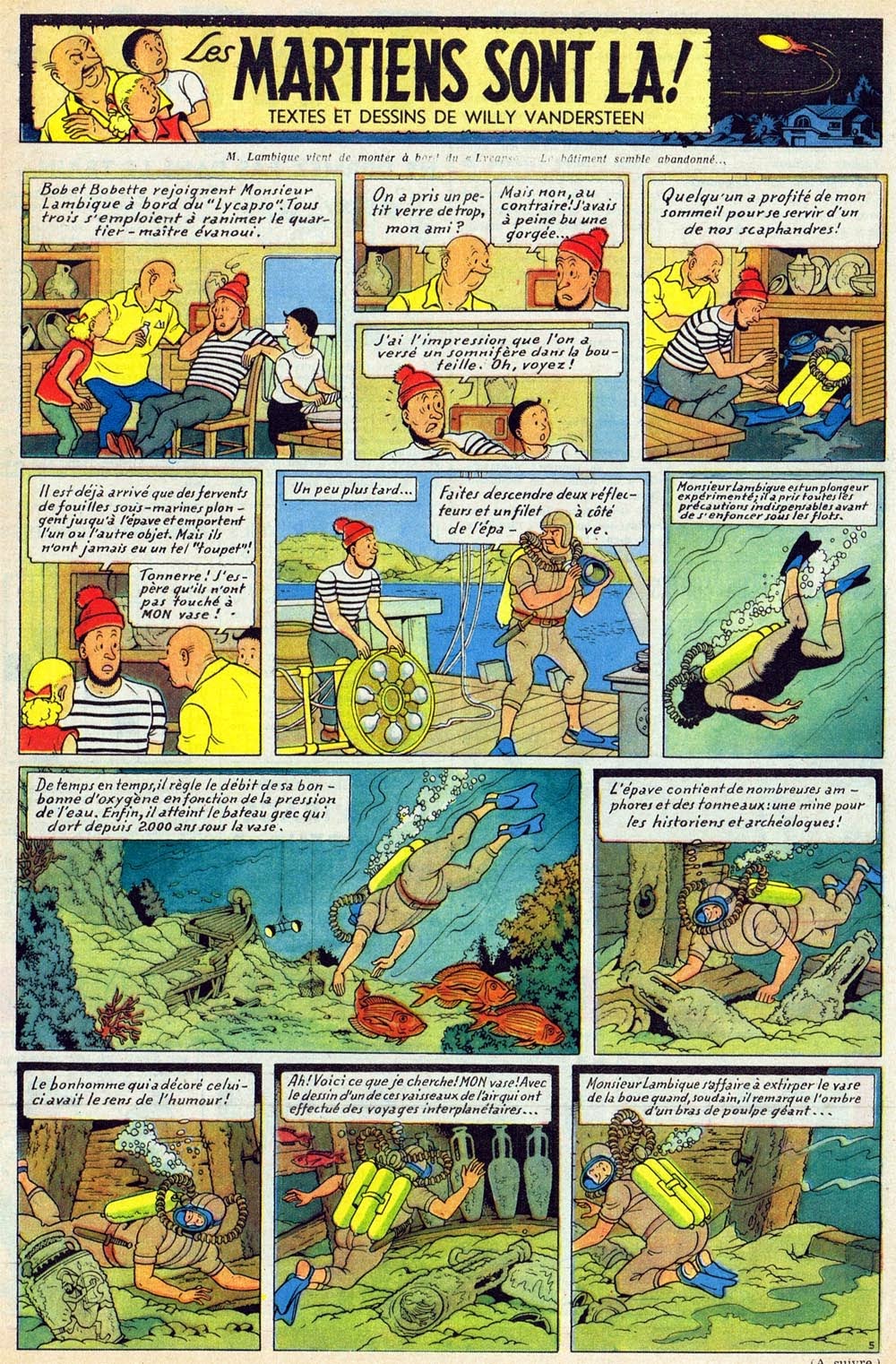 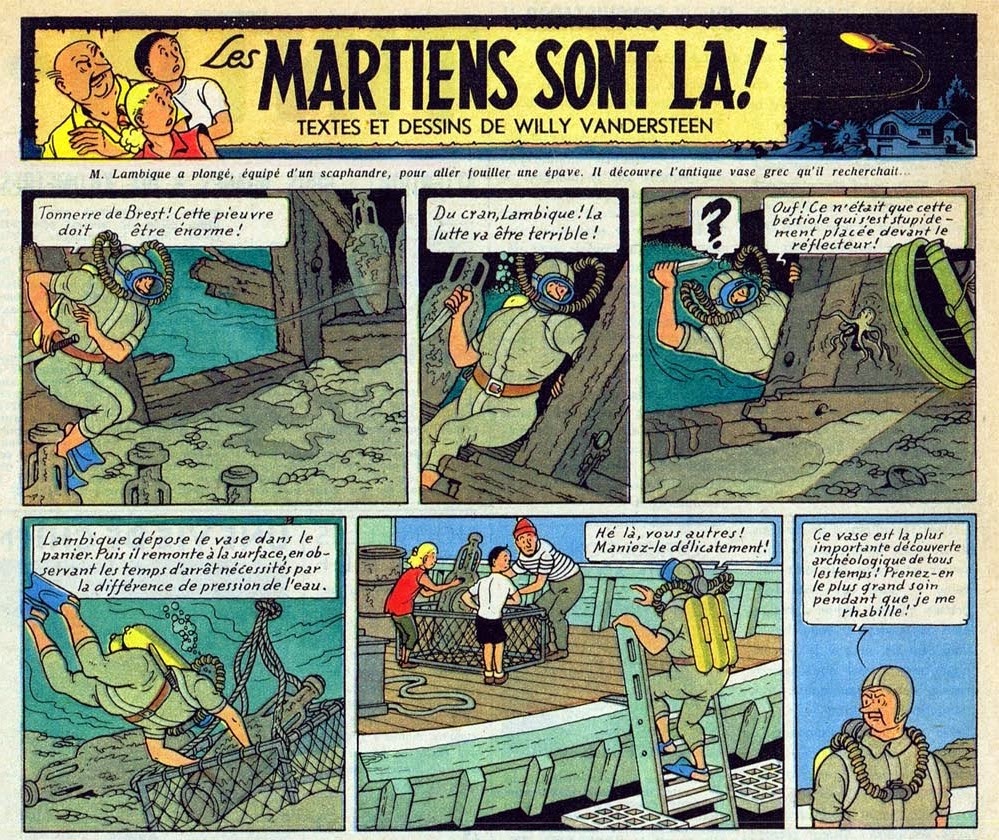 As the exploits of Jacques Cousteau would have been well known at the time it's perhaps not surprising to see M. Lambique (aka Ambrose) using the three-cylinder system used by Cousteau.