The Art of Diving with Modesty - Neville Colvin

This is the final entry in my series looking at the artists of the Modesty Blaise strip. As I'll be featuring a single story here, one that happens to be a favourite of mine, I'll be looking at more than just the diving sequences. If you've never read Modesty Blaise this will hopefully give you a flavour of the strip. Unfortunately the reproduction of the artwork in these scans isn't the best but hopefully it won't detract from your enjoyment too much. (Click on the images for larger scans).

Neville Colin's first strip appeared in the Evening Standard on May 27th 1980. However, this wasn't his first association with the character. At some point in the late '70's, writer Peter O'Donnell had been planning a weekly Modesty Blaise strip to appear in the Sunday Express and Colvin was the artist selected to draw it. He completed nine weeks worth of artwork for a story called The Scarlet Maiden but ultimately the idea was abandoned.

When he became the regular artist on the daily strip, Colvin suggested they revive the Scarlet Maiden storyline. O'Donnell agreed and the new version began on June 28th 1981. 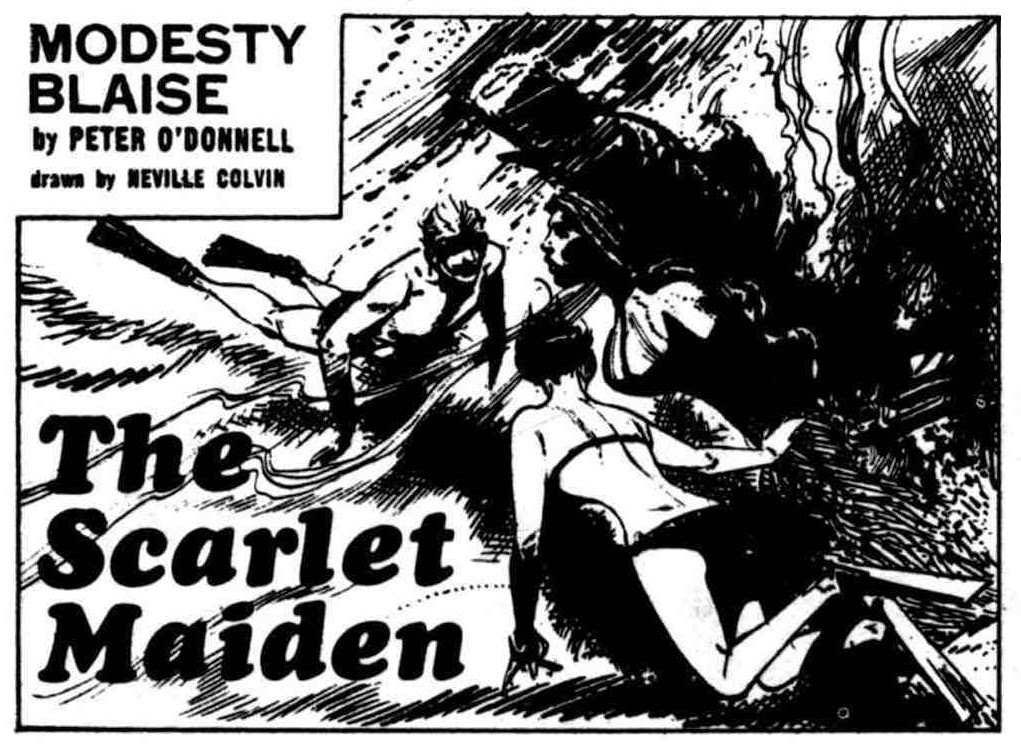 The story opens in 1730 and sees pirate Jethro Redmont going down with his ship rather than face capture by the British navy. In the present day we find our heroine holidaying on St. Cyprian, the Caribbean island where the ship sank. Willie Garvin joins Modesty just as she's attacked by two henchmen of local gangster Dimples Calhoun. This story is generally quite light-hearted as shown by Willie's refusal to join the fight. 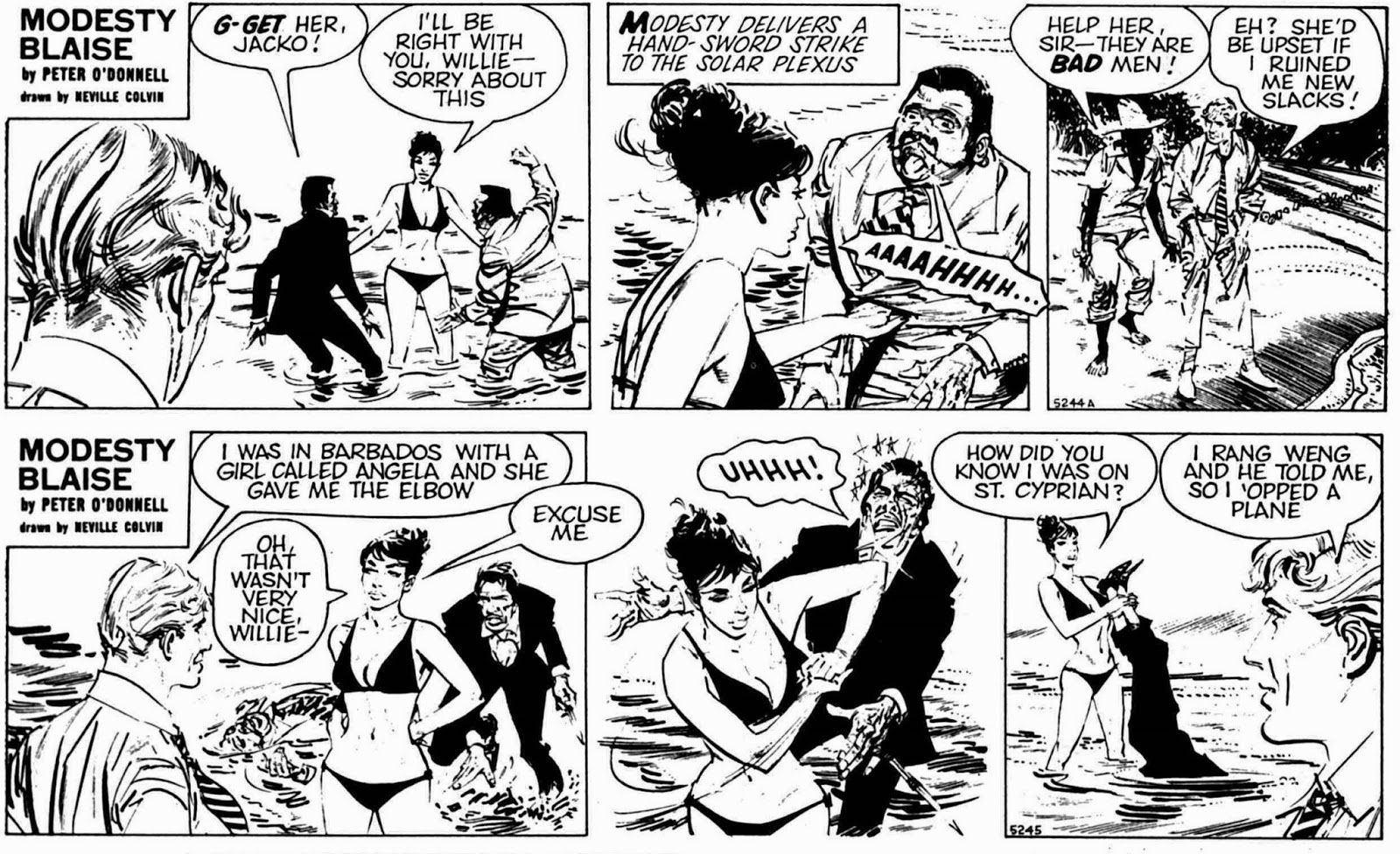 I particularly like the fact that Willie mentions being elbowed and we then see Modesty hit Henry with an elbow strike.

Modesty takes Willie diving with the promise of a surprise and some more of the story's protagonists are introduced. Treasure-hunters Barney, Rick and Lisa mistakenly believe our heroes have found the wreck of The Scarlet Maiden and its pirate treasure. 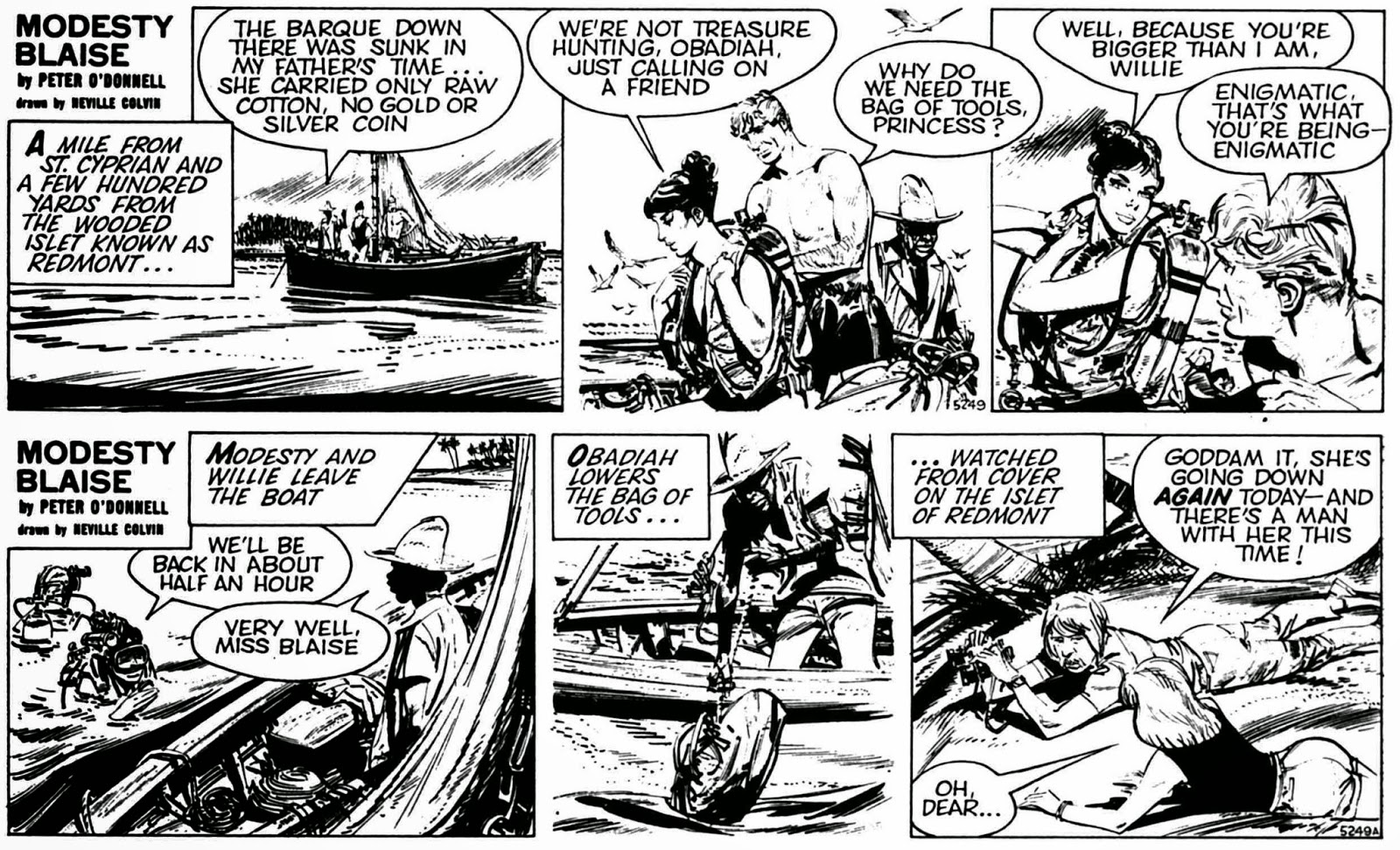 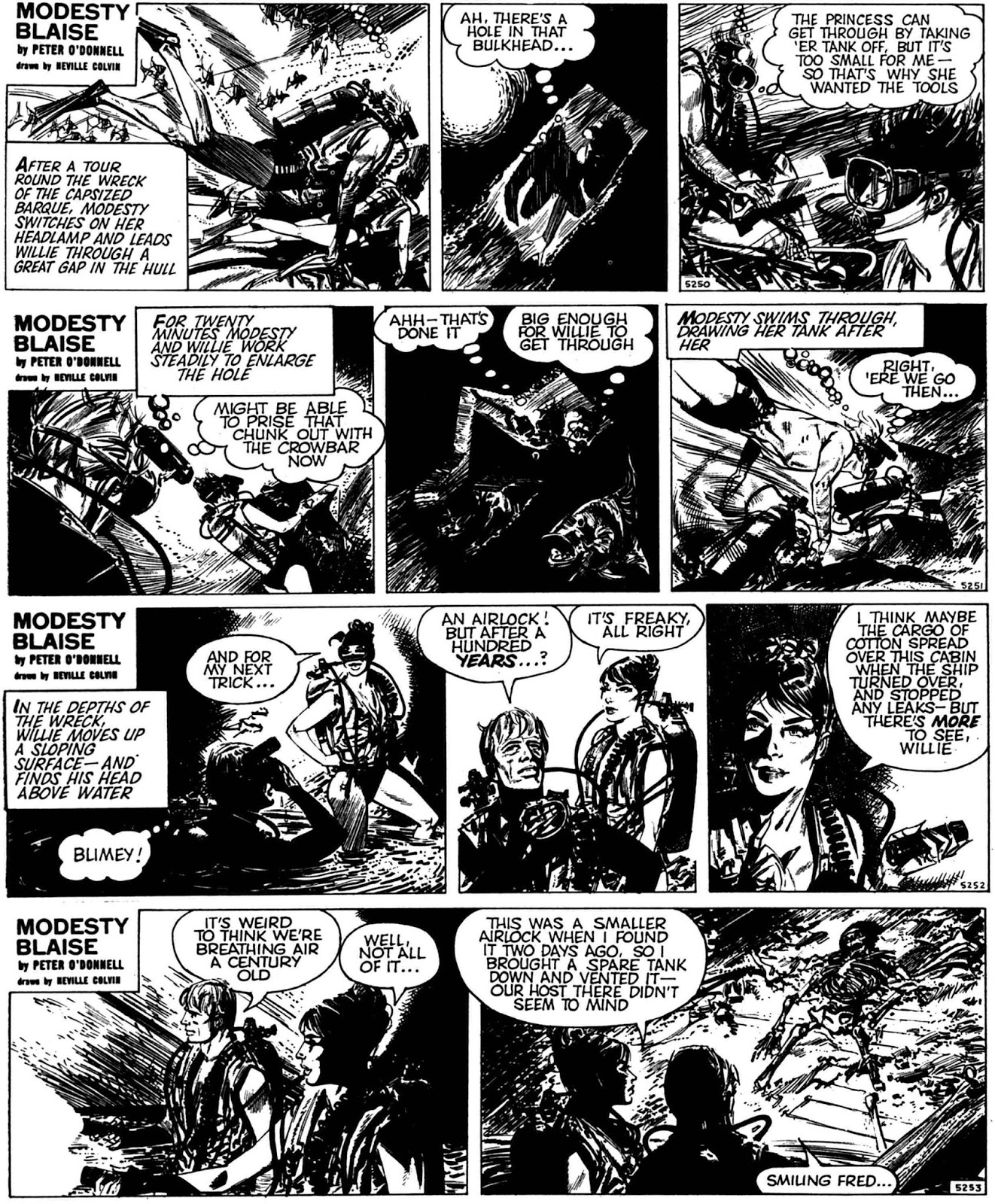 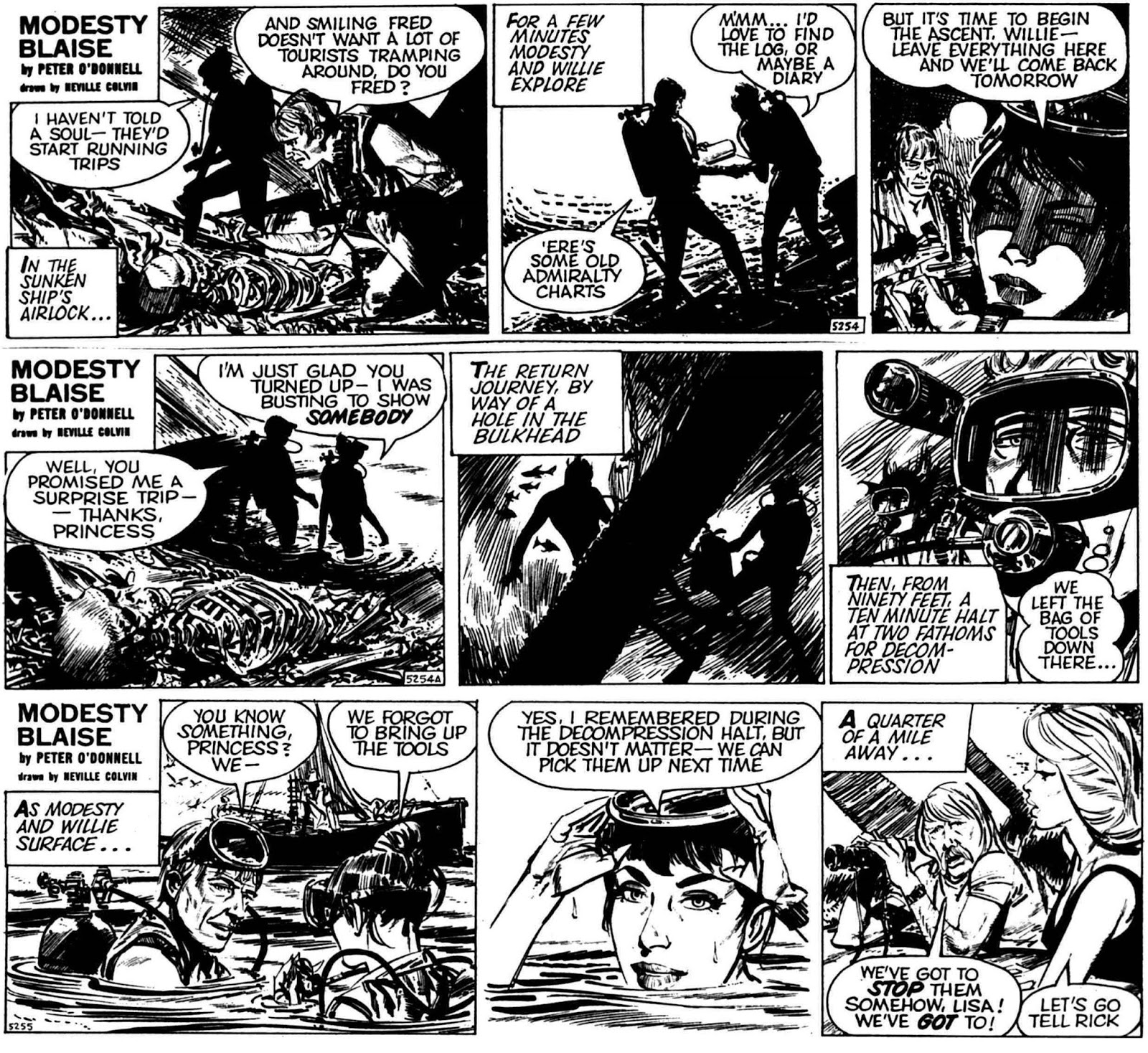 The trio kidnap Modesty and Willie who, intrigued by what's happening, decide to play along. The play-acting by both parties provides a nice running gag throughout the story. 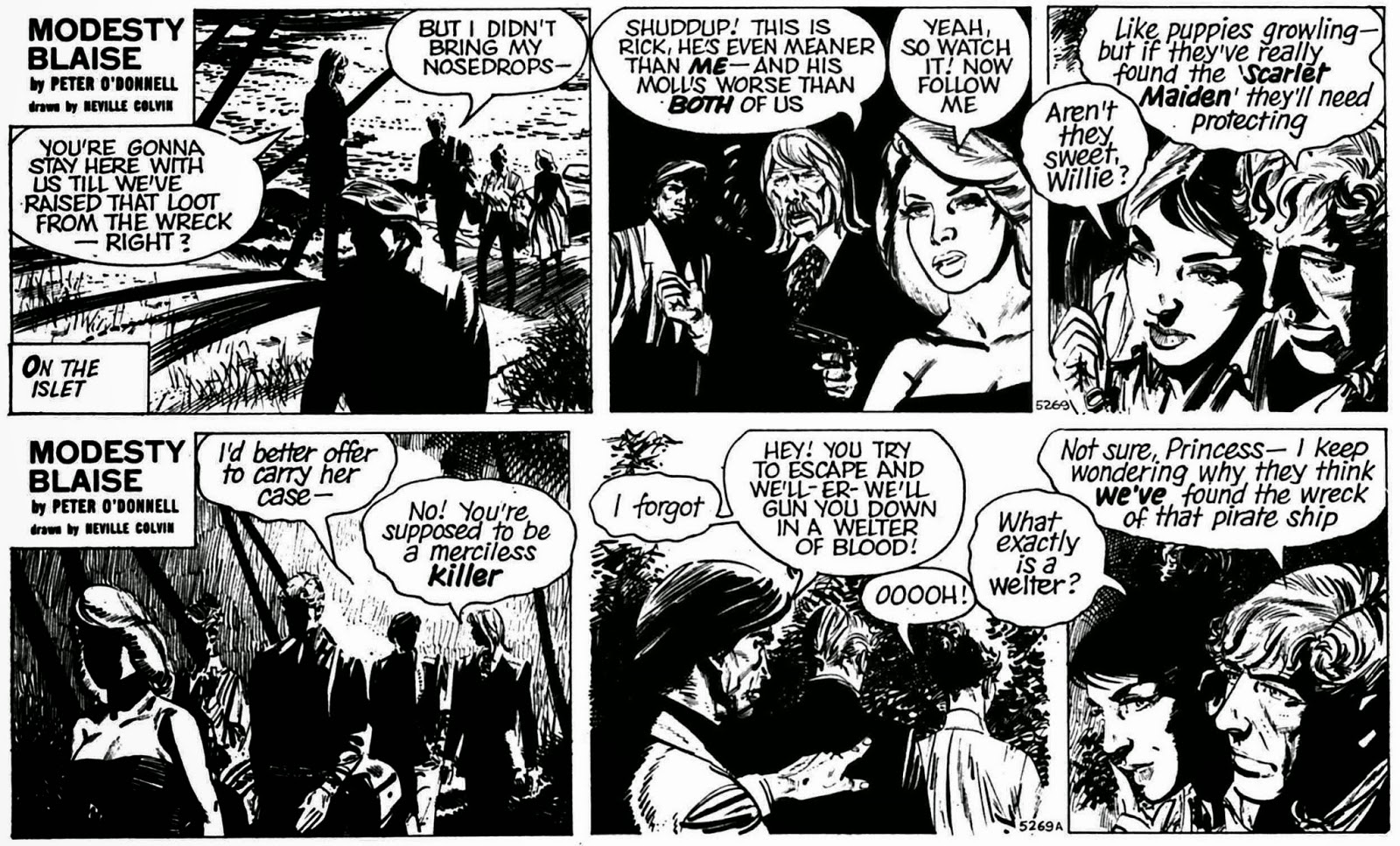 Our heroes are then forced to help recover the treasure. 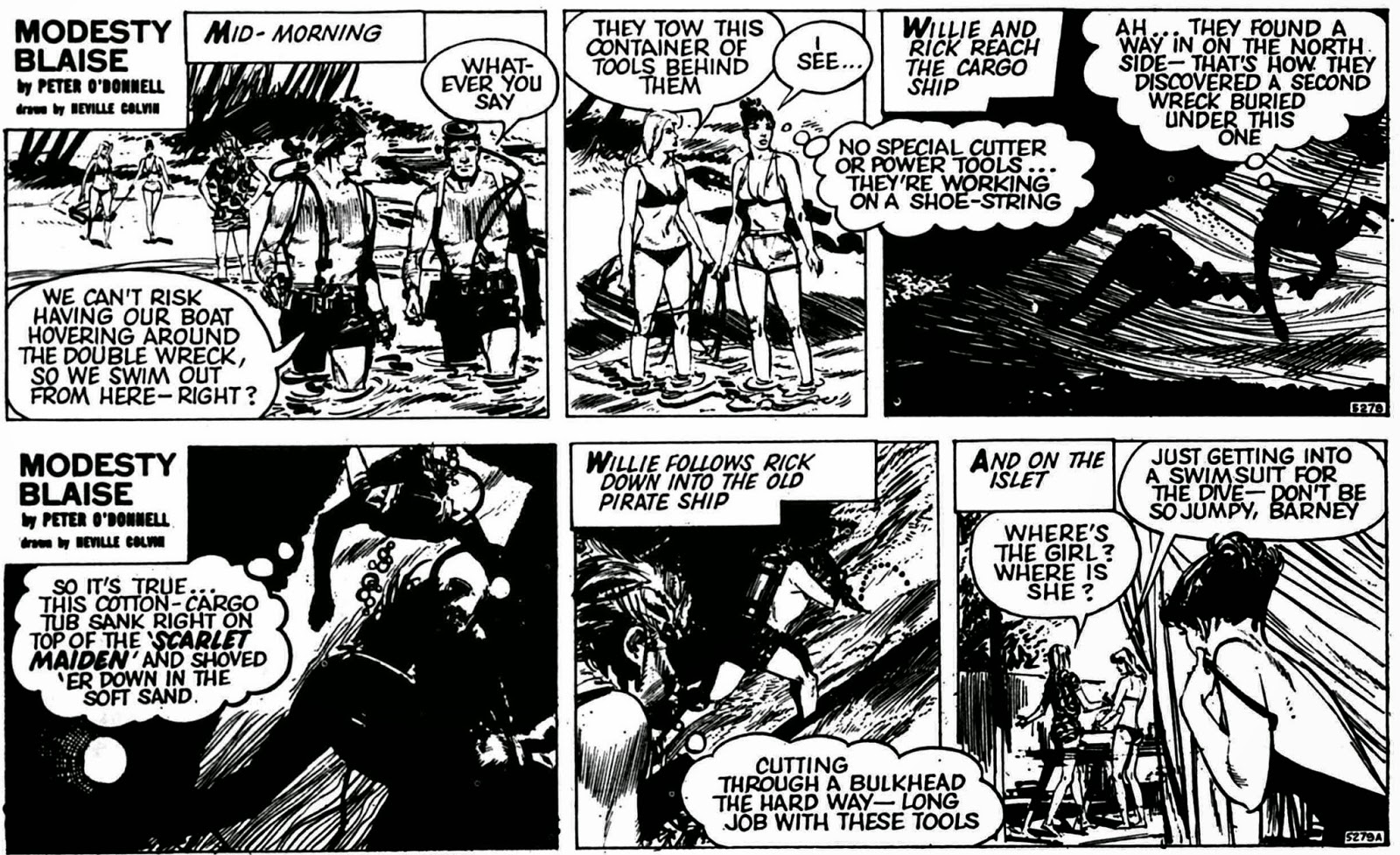 While this is happening we are introduced to one of Jethro's descendants, Major Redmont, who knows about the treasure and wants it to remain where it is. Beautifully depicted by Colvin, the Major is a typical O'Donnell eccentric and, with his butler Tompkins, is one of a number of master/servant duos that appeared over the years. 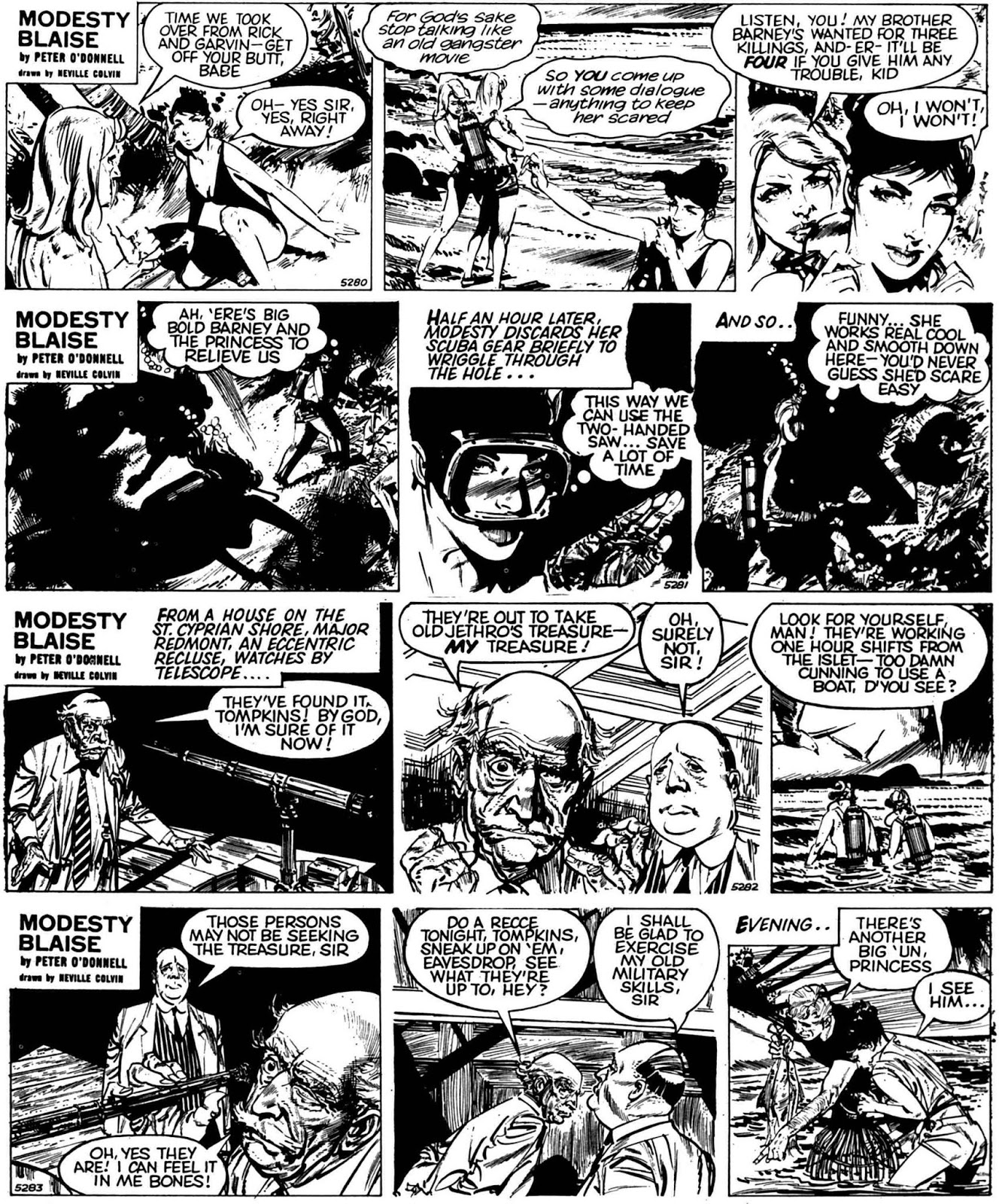 As the story progresses, the treasure-hunters find it harder to keep up their façade of being tough.

The Major sends Tompkins to enlist the help of Dimples Calhoun in scaring off the young divers, not realising who he's dealing with.

Having found the treasure, Barney, Rick and Lisa reveal their true nature to Modesty and Willie who maintain their timid personas.

Calhoun and his men arrive forcing Modesty and Willie into action. Unfortunately the group are captured, with our heroes being put in irons. Remembering Smiling Fred, they jump over the side of Dimples' yacht and our baddies assume they've drowned. Modesty and Willie use the tools that were left in the wreck to free themselves and return to rescue the others, now including Major Redmont and Tompkins. 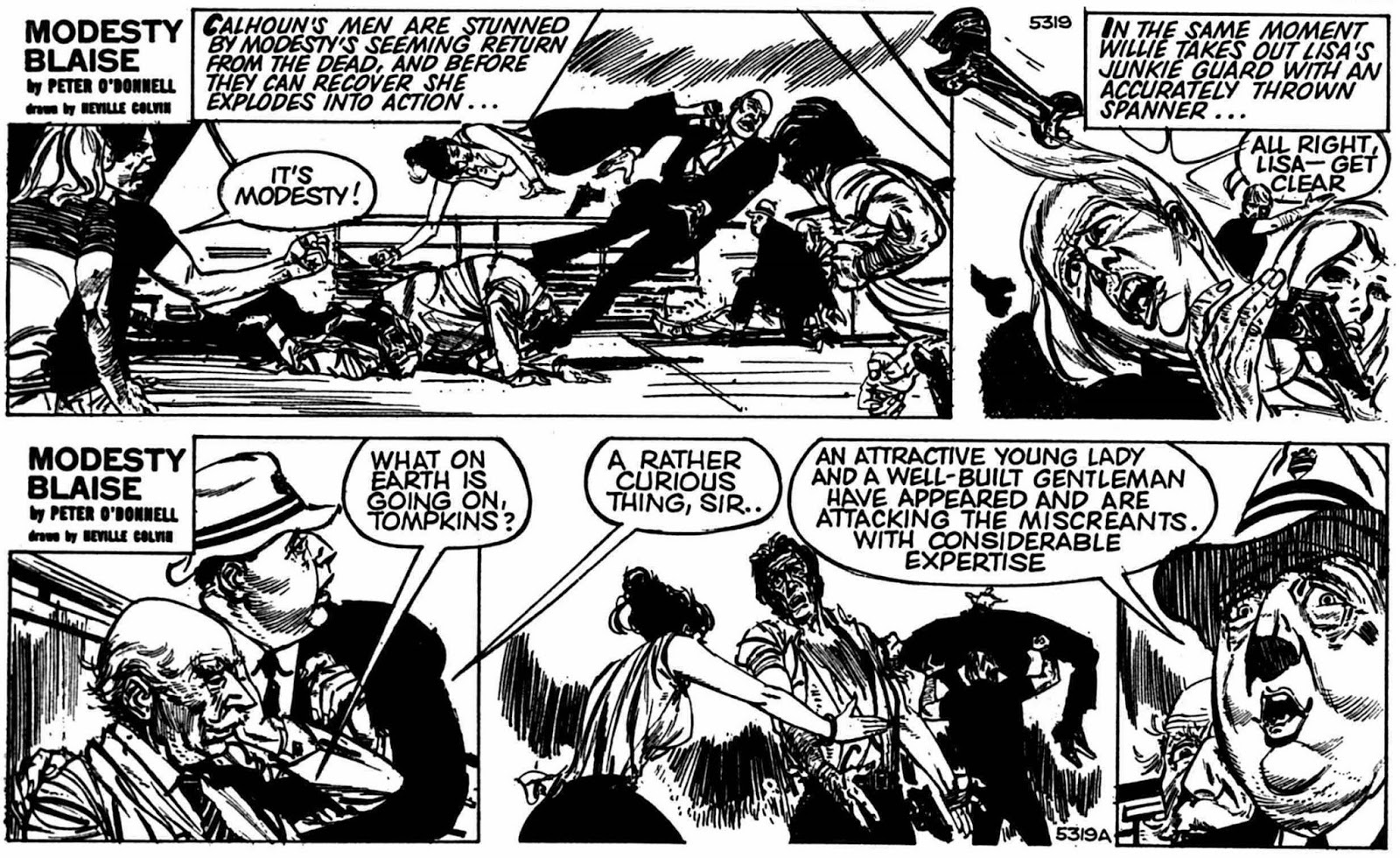 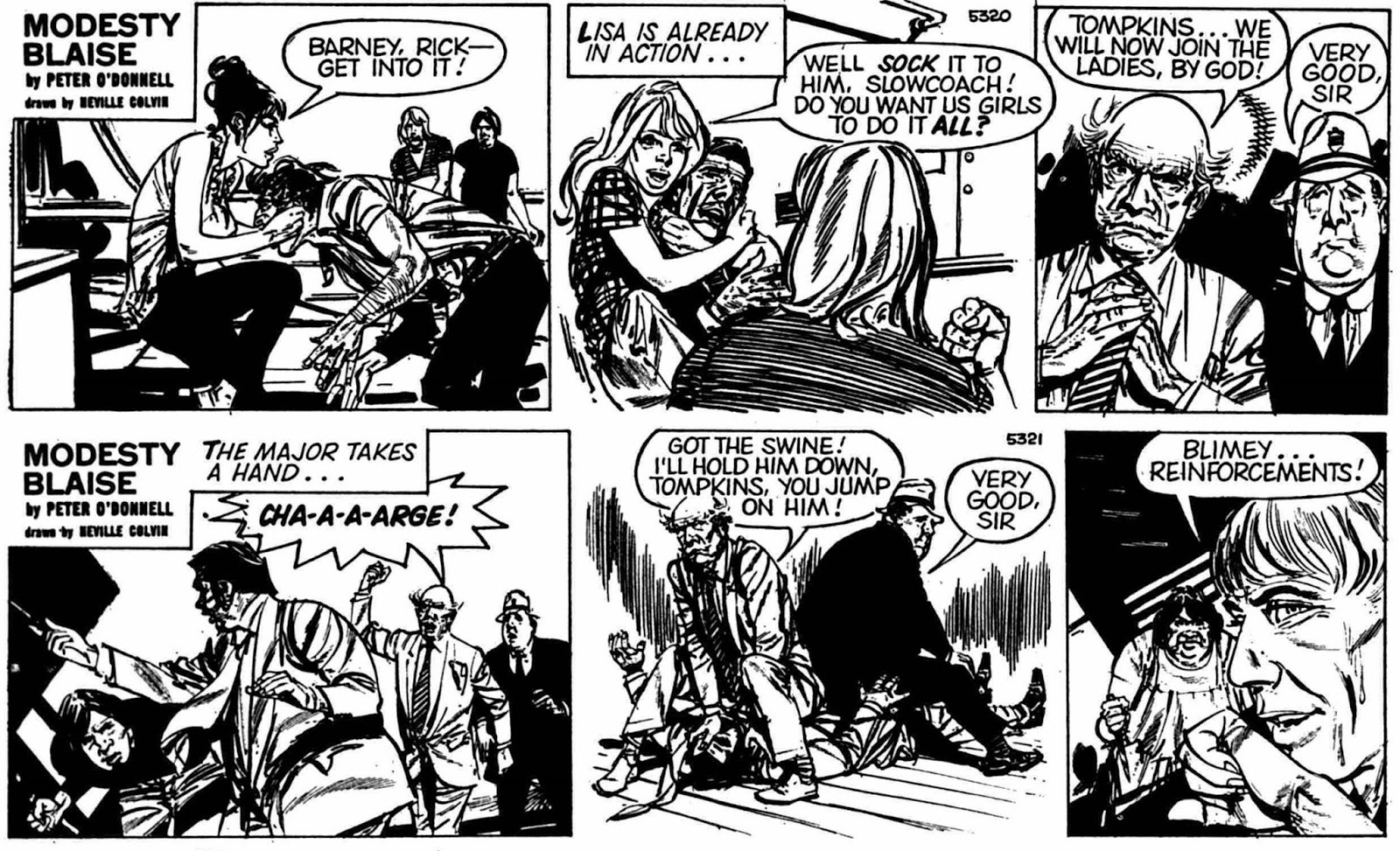 Naturally the good guys prevail in the end.

The Major allows Barney and the others to bring up the treasure before alerting the authorities. 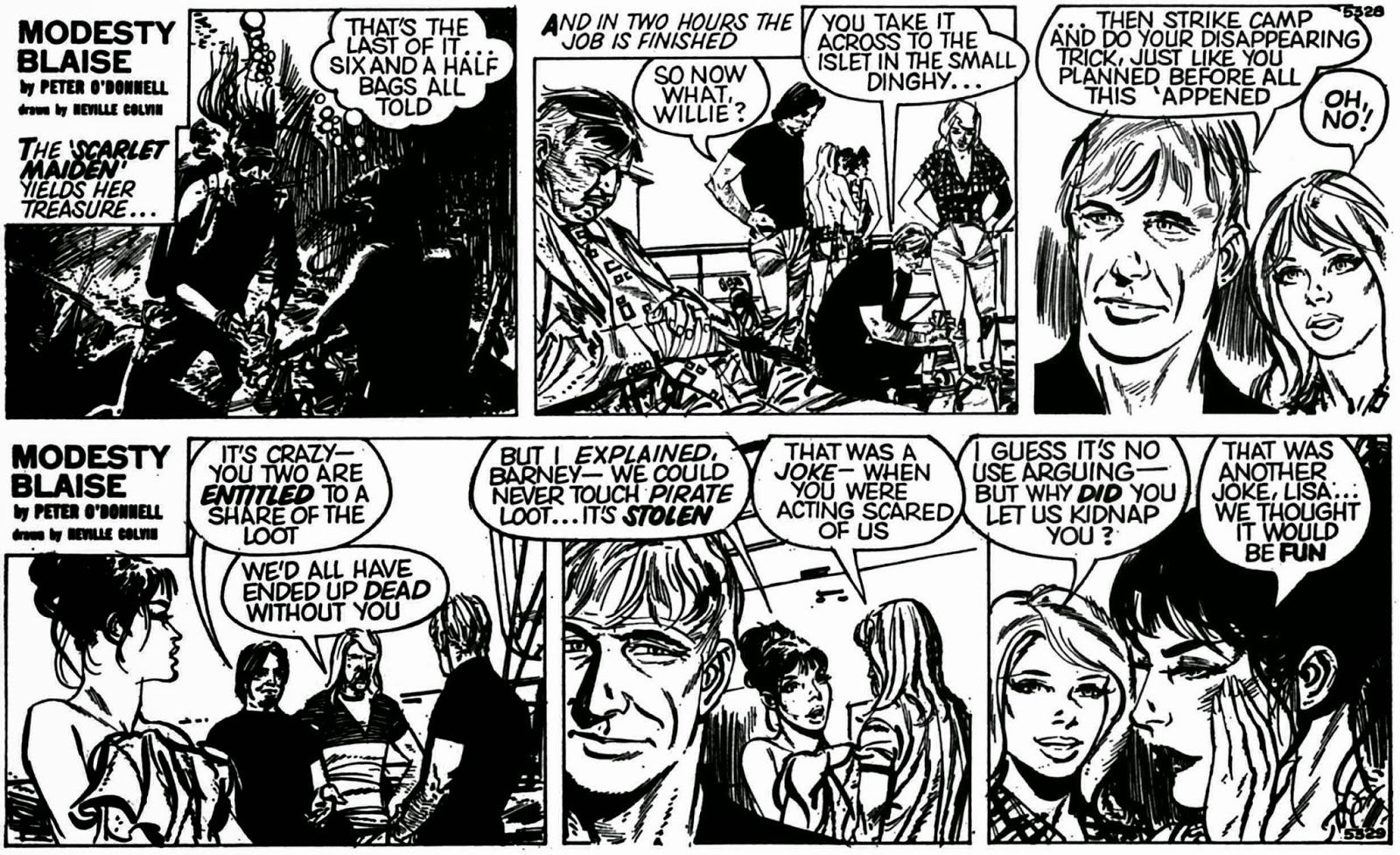 ﻿
Neville Colvin was born in 1918 in Dunedin, New Zealand. Studying for an art degree with the intention of becoming a teacher, he joined the army during World War II and trained as a commando. He went to the Middle East to draw maps with the Second New Zealand Expeditionary Force. He also became a cartoonist for the army newspaper.

After the war he illustrated two books before joining the Wellington Evening Post in 1946. He drew political and sports cartoons for the paper but eventually grew tired of government censorship. In 1956 he took a holiday in London with his wife Margaret and they stayed for the next 30 years! He spent several years working as a cartoonist for a number of different newspapers before expanding into comics. He work included Ginger and Co. in Swift (1960-62) and in 1976-77 he spent a short time drawing the James Bond strip in The Daily Express.

Colvin drew 16 Modesty Blaise stories from 1980-86 when he retired aged 68. He went back to New Zealand for a short time but returned to his Hampstead home when he became ill. He died of liver cancer in 1991, aged 72. His obituary described him as the "best line artist in Britain".

Neville Colvin's contribution to Modesty Blaise often goes overlooked compared to Jim Holdaway or Romero but there's much to enjoy in his work, particularly his knack of drawing distinctive, memorable characters. I believe The Scarlet Maiden is a fine example of his talents.

The Amazing Art of Diving

This post features a full-page illustration from The Amazing Spider-Man Annual #1. Published in 1964, the comic featured six of Spider-Man's deadliest foes and artist Steve Ditko used the extra space of the annual format to include six action-packed splash pages. In this example we see Doctor Octopus wearing scuba gear to fight our wall-crawling hero in a giant fishbowl!

I've also included the preceding panel where we can see that Ditko has obviously used some reference for the regulator, unlike some of the other artists featured in this blog. (Click for larger images). 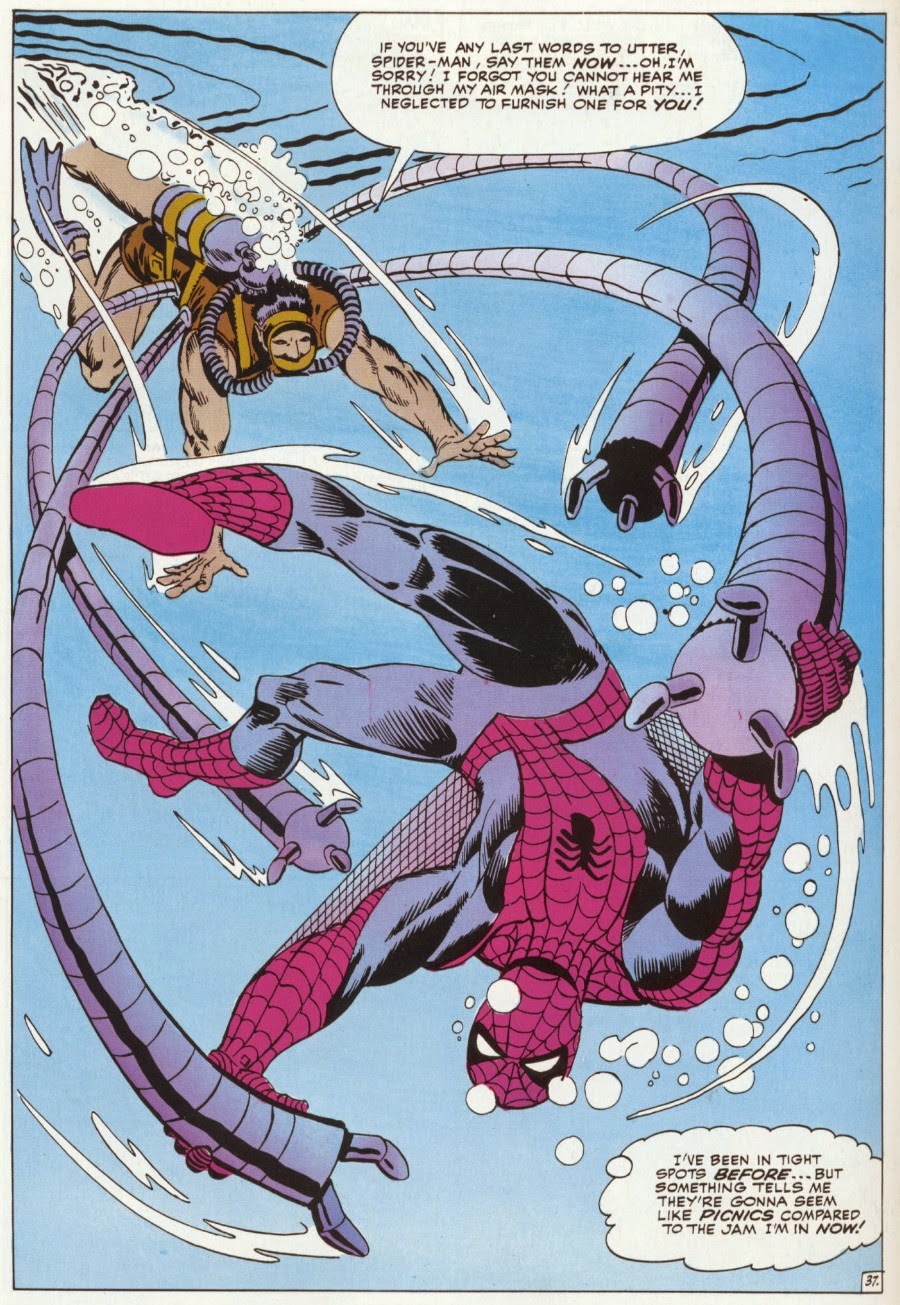 Three of a Kind - Sea Siege

The first cover is from the original hardback edition (artist unknown). 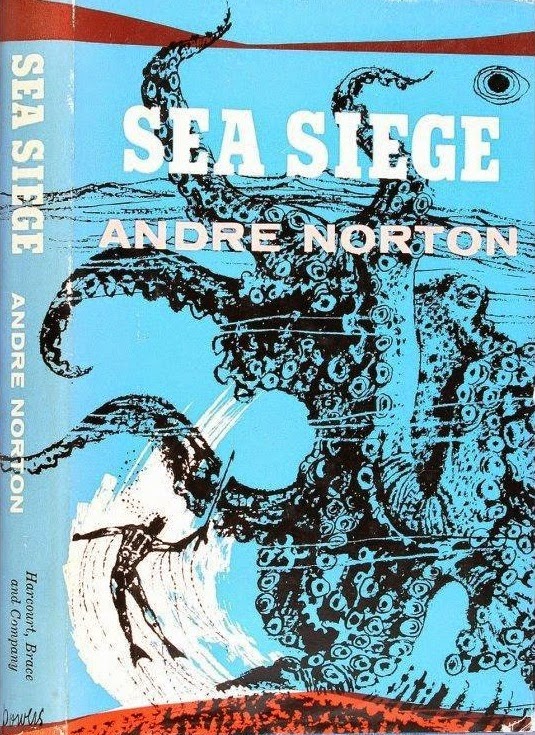 This 1971 paperback edition features a cover by transgendered artist Jeff Jones who died in 2011. You can read more about Jones' sometimes tragic life here. 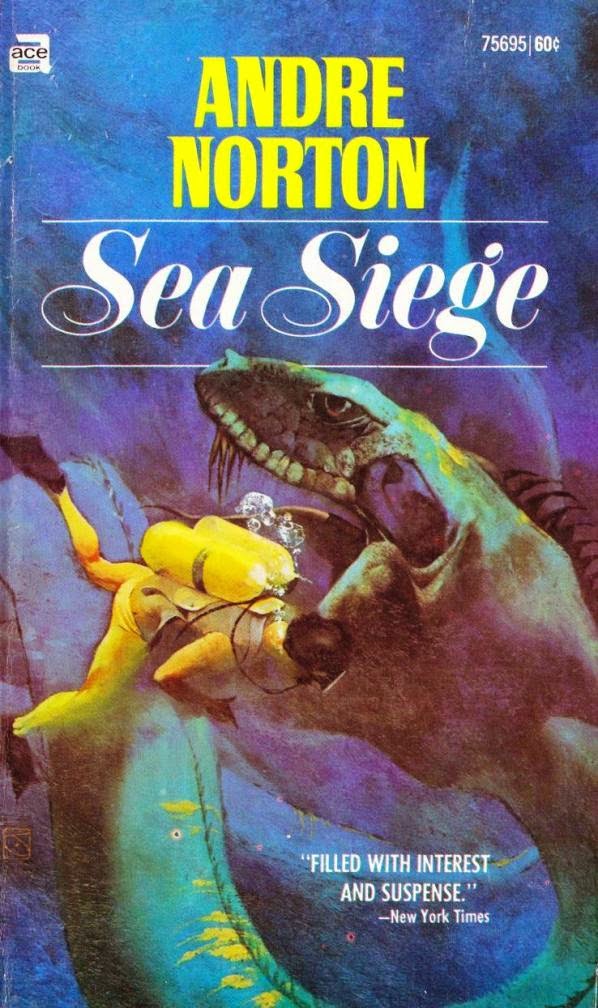 This 1980 cover was painted by Ken Barr who was one of the original cover artists for D.C. Thomson's long-running Commando series. His other work includes covers for Marvel's magazine range in the '70s (Doc Savage, Marvel Preview, Deadly Hands of Kung-Fu etc.) as well as strip work for Warren's Eerie and Creepy and DC's G.I. Combat and Ghosts. 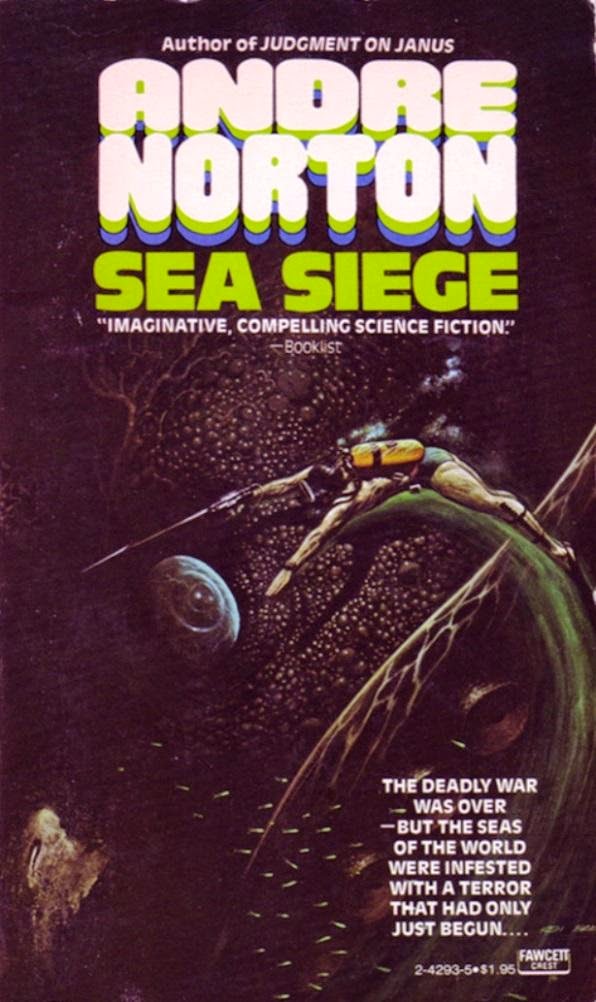 Here's a quickie for you, another of Walter Molino's wonderful paintings for La Domenica Del Corriere. This one, from May 1958, shows some underwater surgery taking place in a Florida aquarium. The surgeons performed "an unprecedented operation. The patient was a "Jew fish," one of those monstrous and gigantic beings that belong to the family Serranidae. Surgery was required to remove from the body of the fish a bulky object that the animal had swallowed some time before." 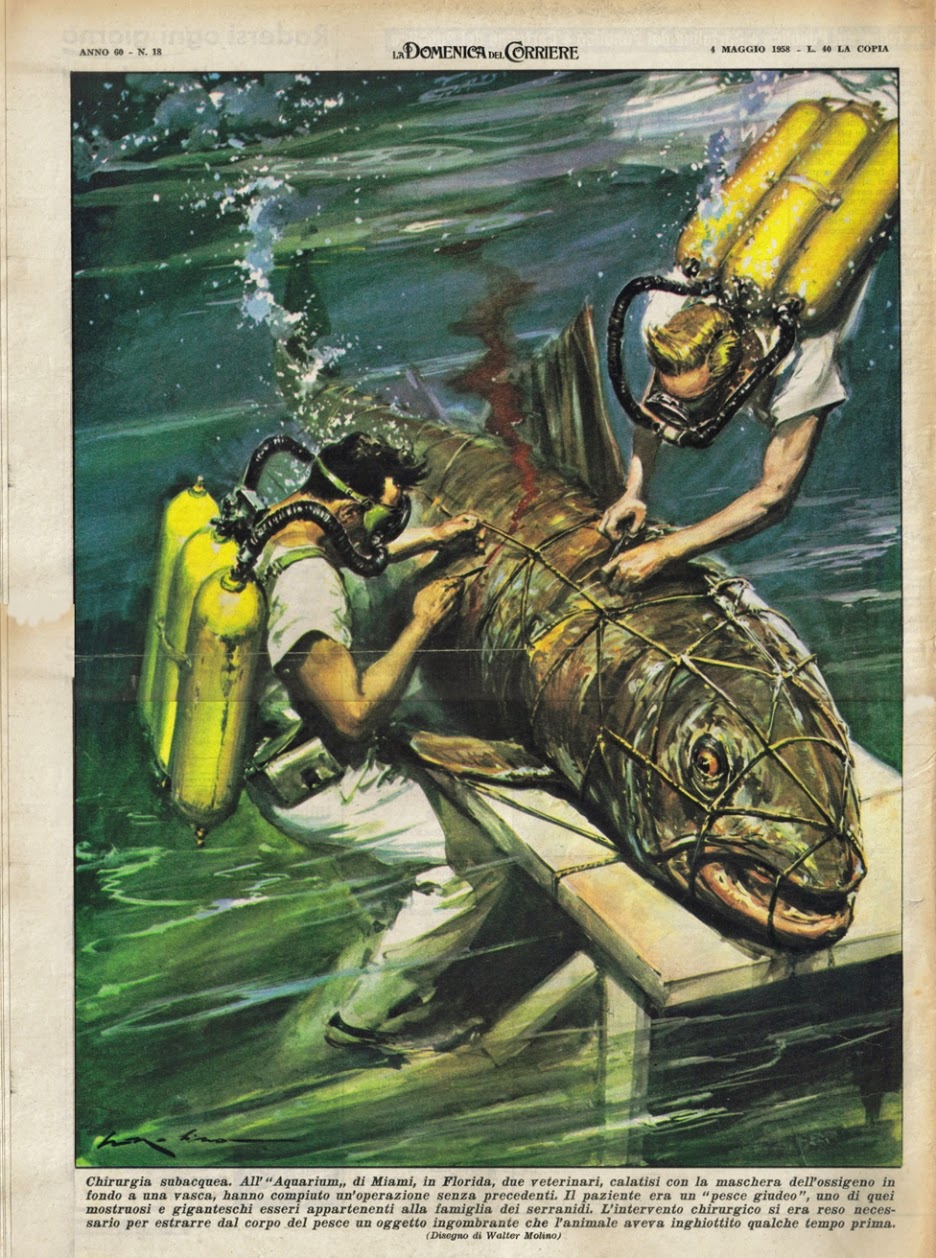 Today's final post features Simple Spyman who appeared in the boys' comic Cracker, launched by D.C. Thomson in 1975. This strip is from the first issue and is drawn by Bill Ritchie (1931-2010). (Click for larger image). 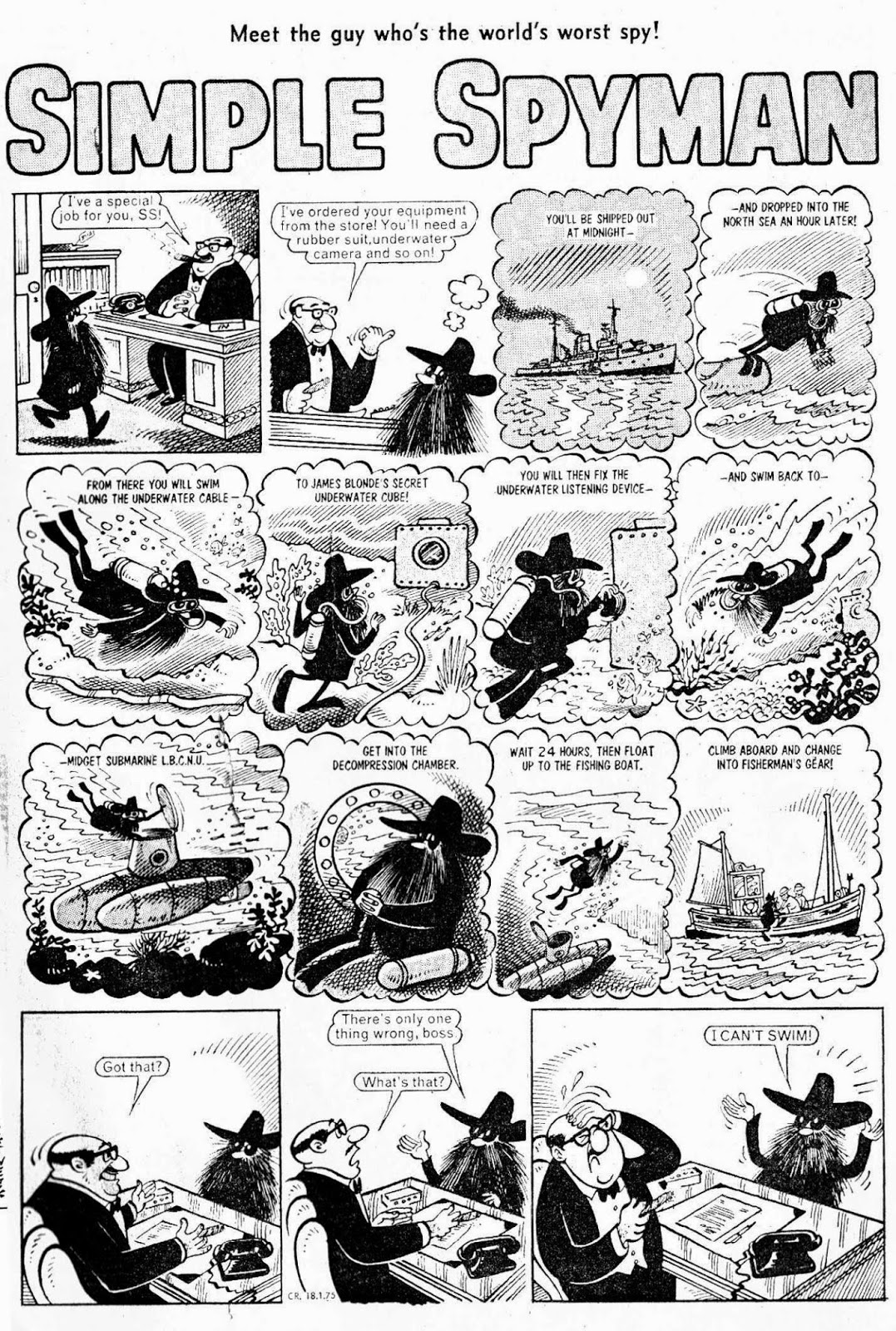 Ritchie is probably best known for drawing Baby Crockett in the Beezer from 1958-1990, almost the entire run of the comic. He also drew the character in stories for younger children in Bimbo and Little Star. His other work included Sparky cover star Barney Bulldog and the Beezer's Smiffy. After his retirement in 1990 he continued to draw cartoons for The Weekly News.
Posted by Robert Moubert at 1/01/2015 06:36:00 am No comments: 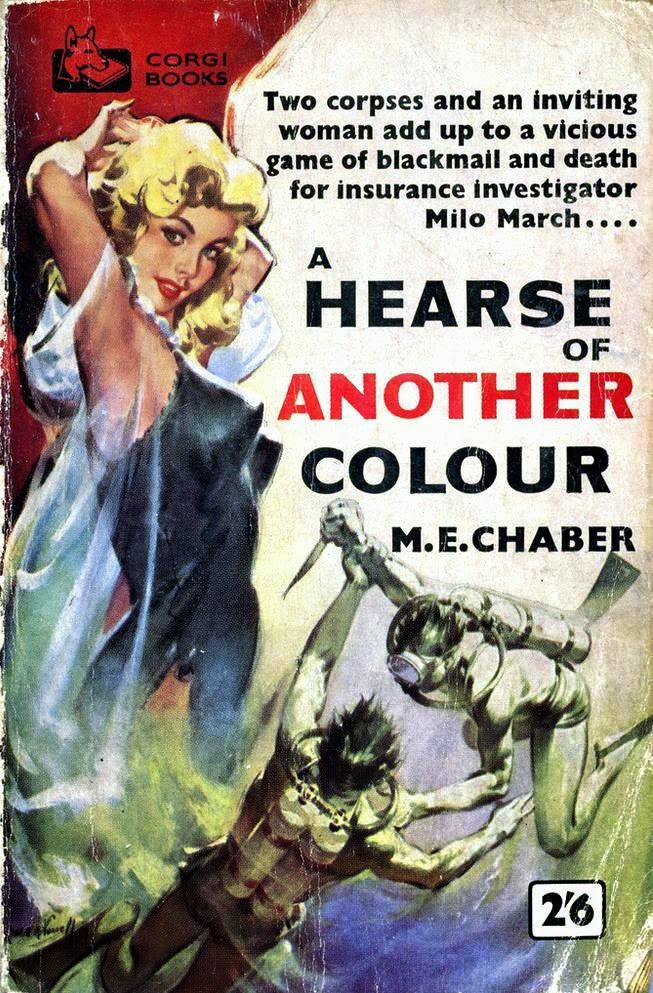 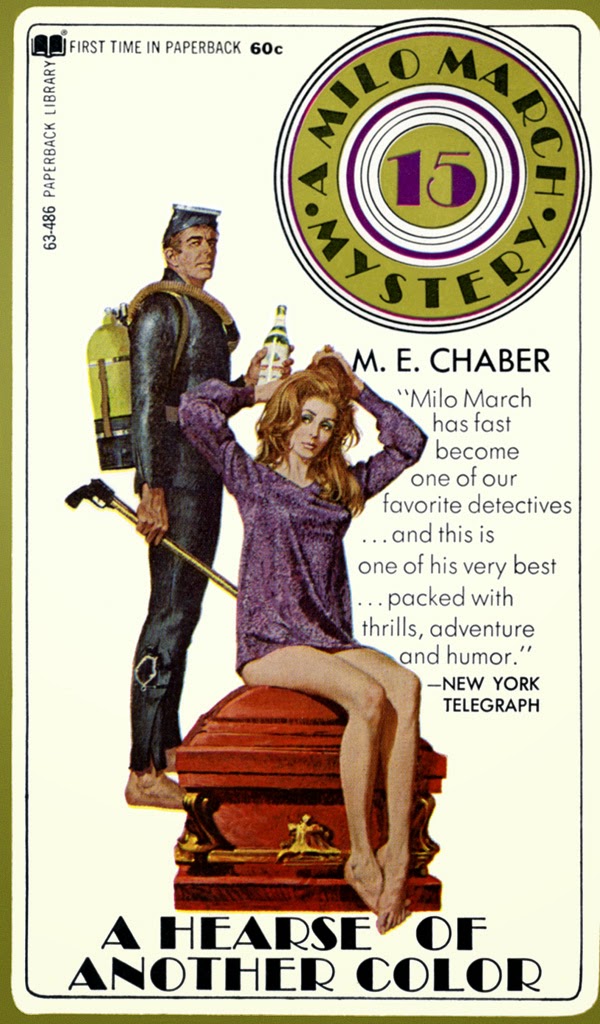 First up is a short story from Boy's World. First appearing 52 years ago this month, Boy's World was published by Odhams Press and was similar in format to the renowned Eagle which Odhams had acquired a few years earlier in their takeover of Hulton Press. Boy's World had a relatively short life, merging with Eagle in October 1964. I'm afraid I have no information as to the writer and artist. (Click on the image for a larger scan). 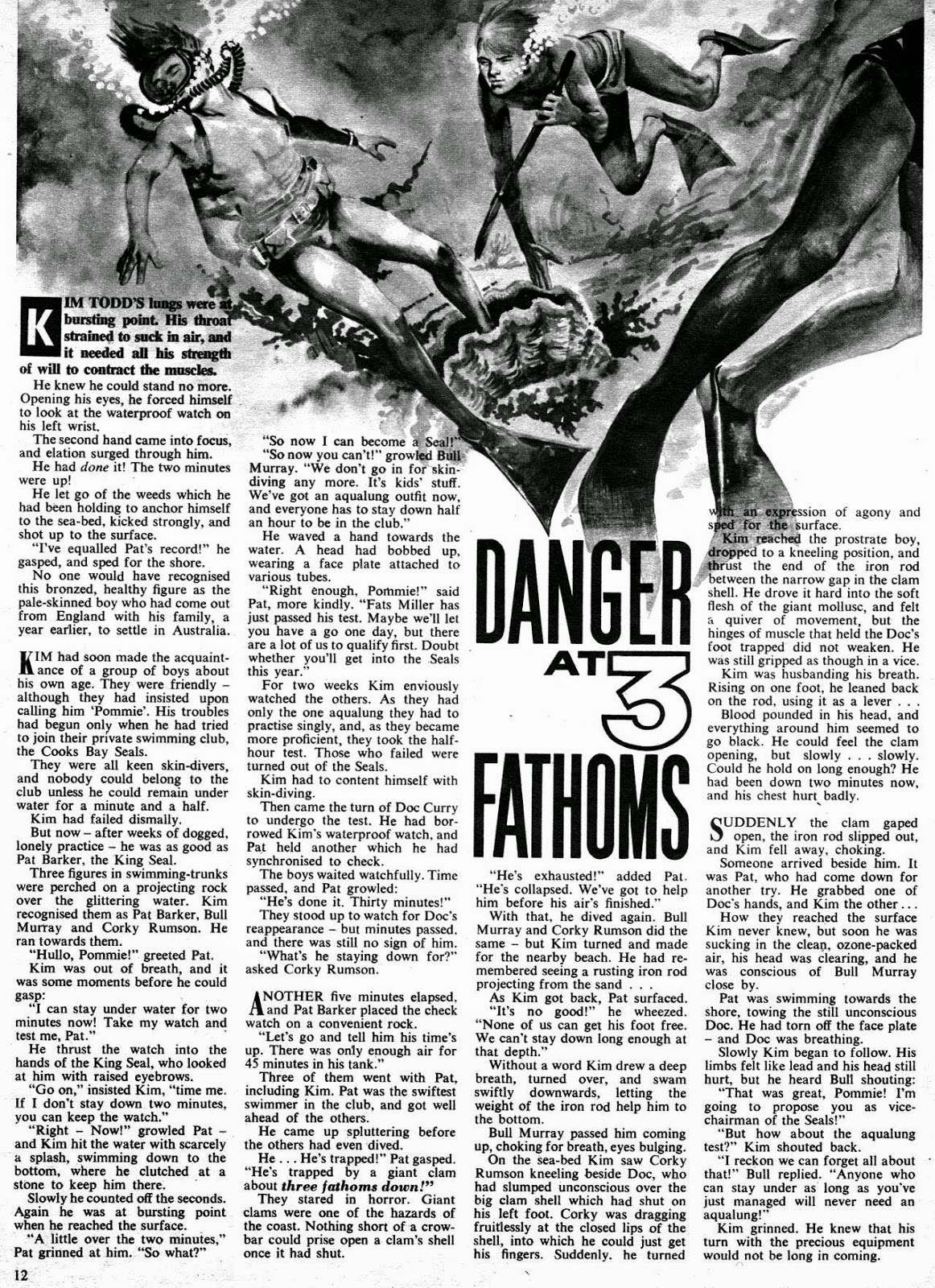