Teenage detectives have been a staple of children's fiction for decades. One example from France is Michel Thérais who featured in 39 books published between 1958 and 1985 as part of Hachette's Bibliothèque Verte (Green Library). They told of fifteen-year-old Michel who lived in Corbie, a village in Picardy near Amiens. His parents were Lucien, a well-known scientist and chemist, and Claire. His eleven-year-old brother and sister, twins Yves and Marie-France, would often cause him problems. Michel's companions were his cousin Daniel, sixteen-year-old Arthur, a former classmate now working as a mechanic, and swimming champion Martine.

Michel en Plongée was the 14th book in the series and first published in 1964. The cover and other illustrations were by Philippe Daure whose work appeared in all but one of the books. 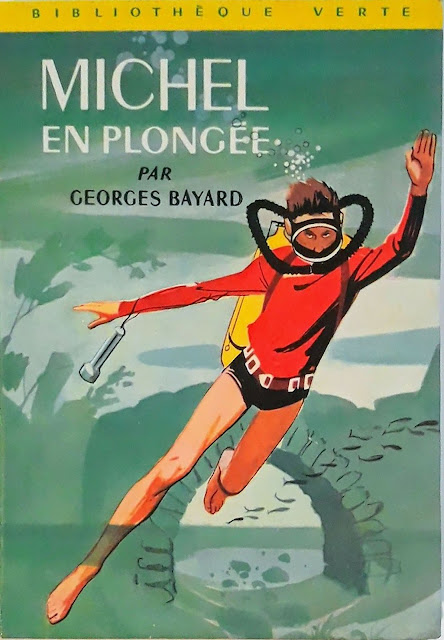 The back cover text read as follows:

and in English coutresy of Bing Translator:

Strange, Michel's idea!
Why spend a holiday in a hamlet half-engulfed under the water?
From the first evening, Uncle Anthonime's farm welcomes unexpected visitors! The mysterious accusation against Michel's uncle involves the honour of the whole family.
The truth, they say, is at the bottom of the well. It is perhaps at the bottom of the lake that Michel will have to look for it, at the cost of what adventures and what difficulties!

On his website, artist Philippe Daure notes that this was the first time the artwork filled the whole cover. On previous books he'd always left some white space for the text. 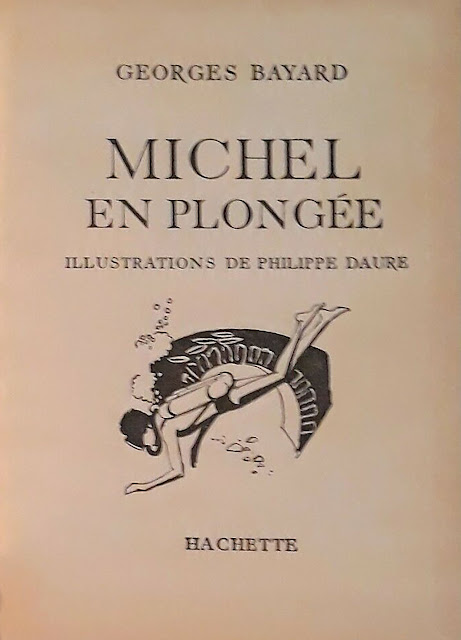 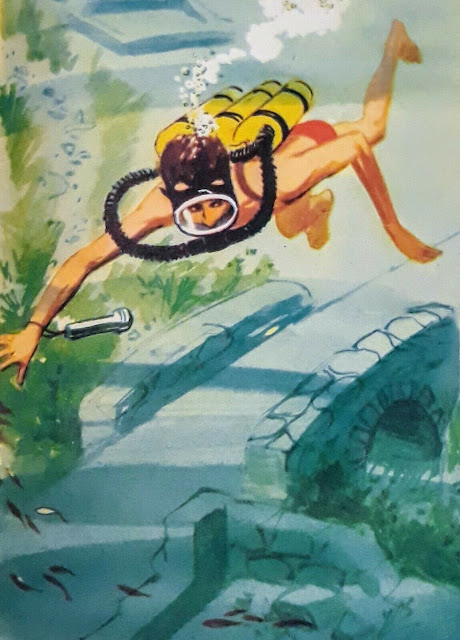 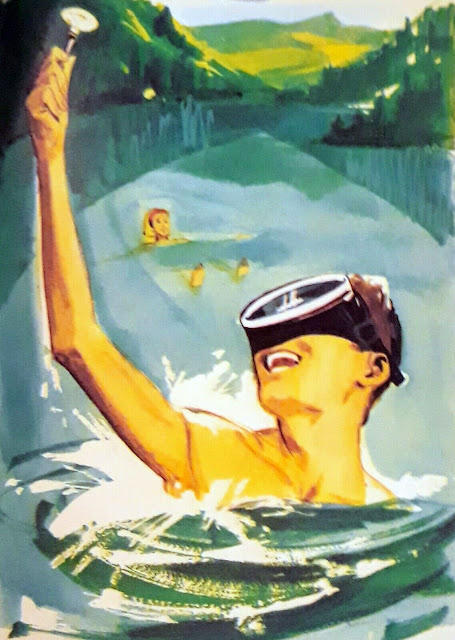 In 1973 the book was reissued with new cover art by Daure: 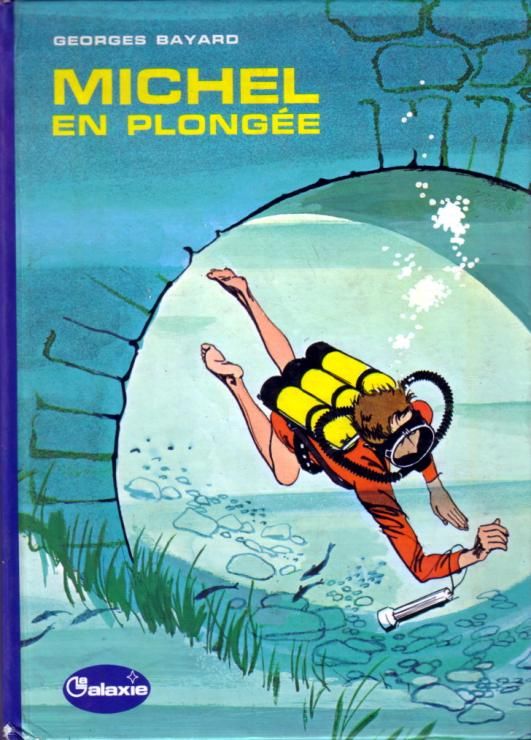 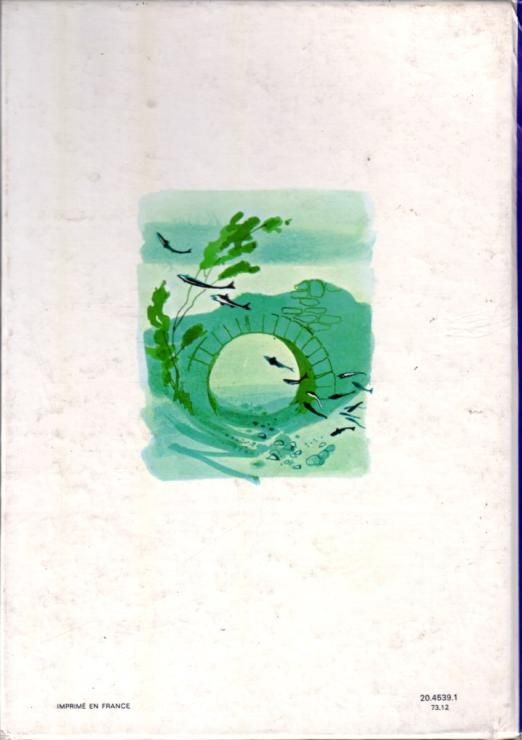 In the 1980s he reworked elements from the front and back covers of the 1973 edition to produce a new piece of artwork: 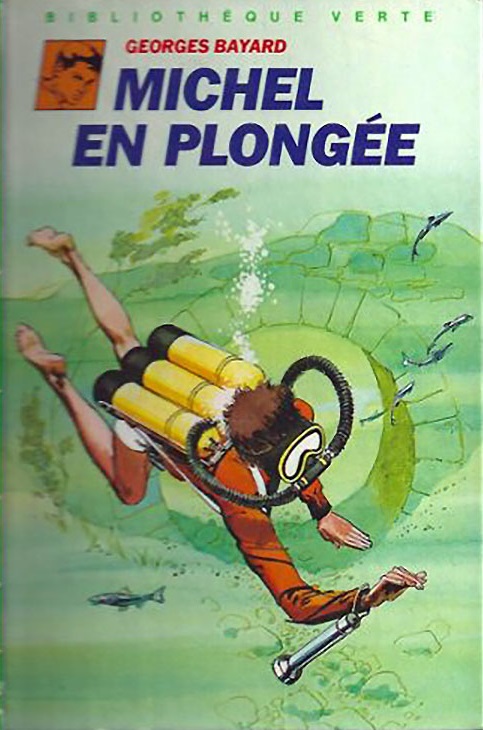 It's interesting to note that he updated Michel's mask but left him with the old Cousteau three-tank system.

The final book of the series, Michel Fait Surface also featured diving and one of the interior illustrations shows some more modern scuba equipment. 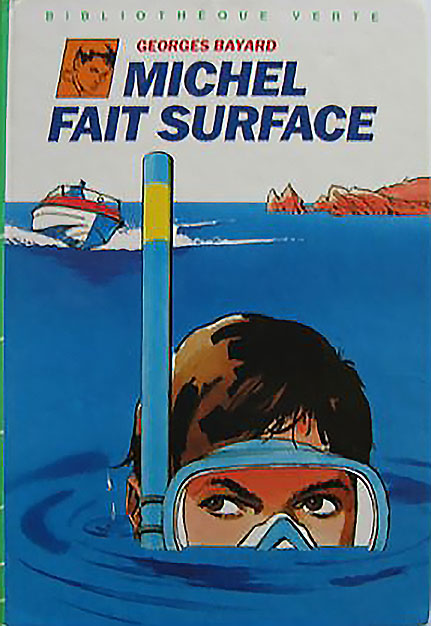 Author Georges Bayard (1918-2004) studied to be a teacher, graduating in Amiens in 1937. The war saw him joining the army as a reserve officer before serving in the resistance. His activities earned him the War Cross and the Medal of Resistance. He rejoined the army in 1944 where he remained until 1952, earning his English interpreters certificate.

In addition to teaching, he became involved in publishing, first by translating English works for French readers before embarking on his own writing career. In addition to the Michel books, his other work included two more series for Hachette, Cécile (also for the Green Library) and César (for the Pink Library). This excellent site describes Cécile and César as a female Michel and Michel with short pants respectively. Three of the César books feature artwork by Philippe Daure.