The Art of Diving with Dolphins - Flipper - The Final Test

The Final Test was the lead story in the first issue of Gold Key's Flipper comic. Art by Dan Spiegle (Click for larger images). 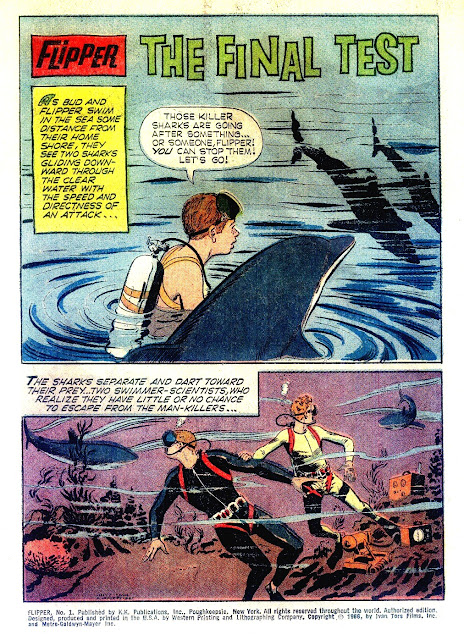 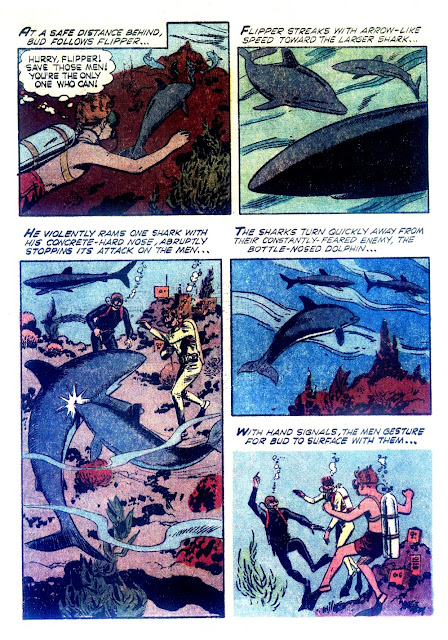 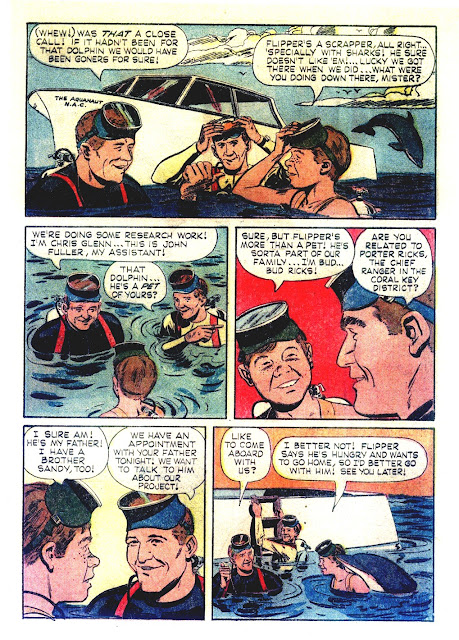 The two scientists want to test Flipper to see if dolphins could act as messengers for divers working underwater. Unfortunately, Flipper loses the first message he's given due to another playful dolphin. Later, Bud and Flipper go to warn Glenn and Fuller of an approaching storm. 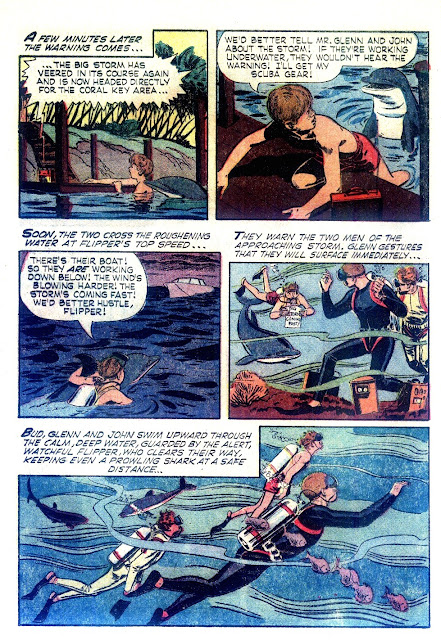 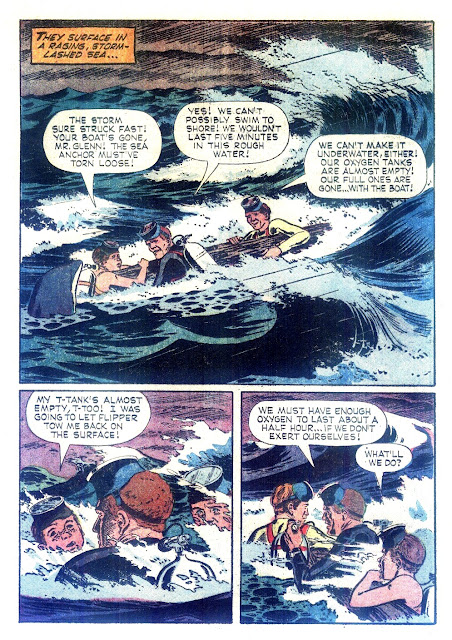 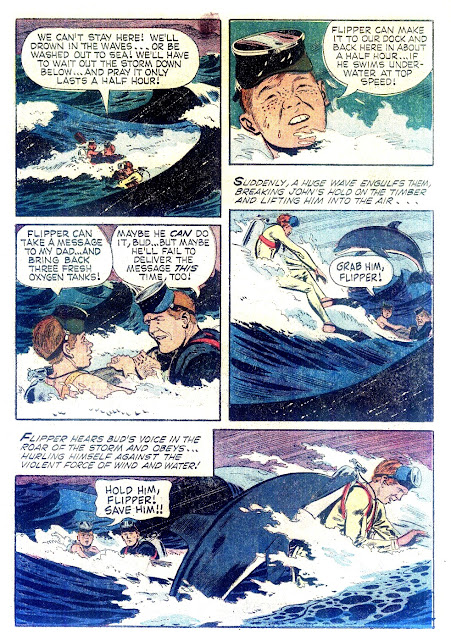 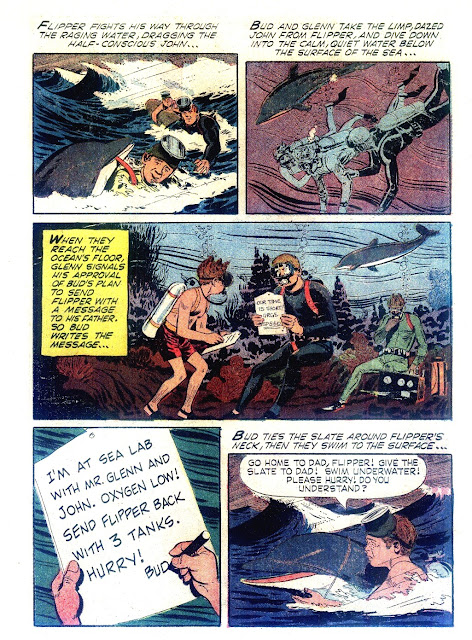 Flipper returns home and Ricks and Sandy equip him with the extra oxygen (sic) tanks. 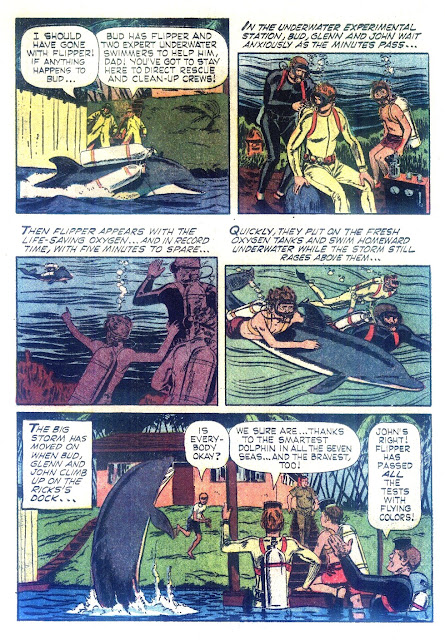 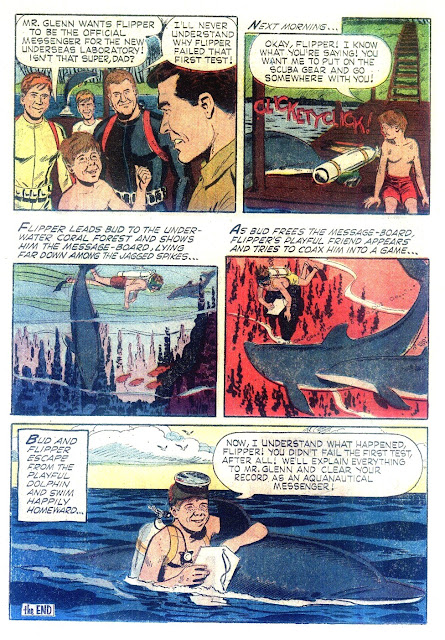 The Art of Diving with Dolphins

Apologies to any fans of Dicky Dolphin and his family but this post features actual dolphins and not those plucky divers from the Topper!

I've just returned from a fabulous week of diving in the Red Sea with SMG Scuba and we were extremely lucky to be joined by dolphins on two of our dives. I've been waiting for this for years and I thought I'd mark the occasion here. Before we get to the artwork, I'd like to share some video footage I shot on the last dive of the trip:

This first example doesn't actually feature divers but regulars will know that I can never resist the chance to show one of Mike Western's wonderful Valiant covers! And no, this one isn't true! (Click for a larger image) 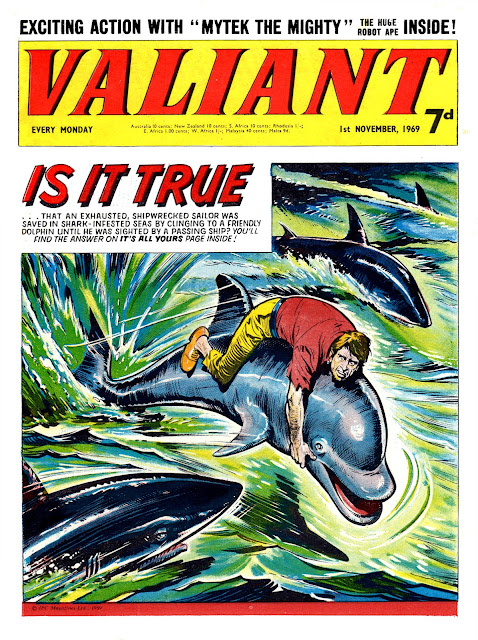 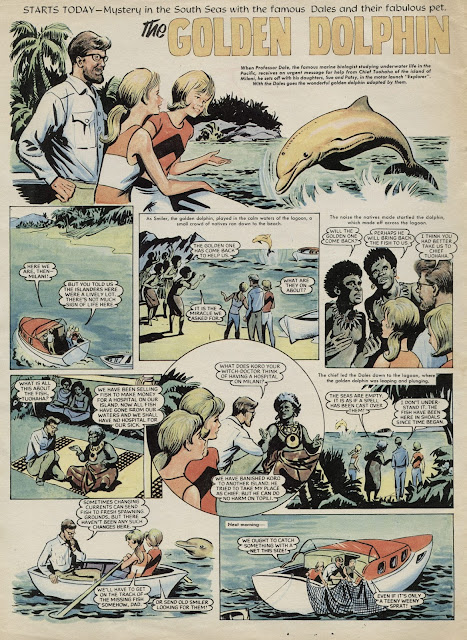 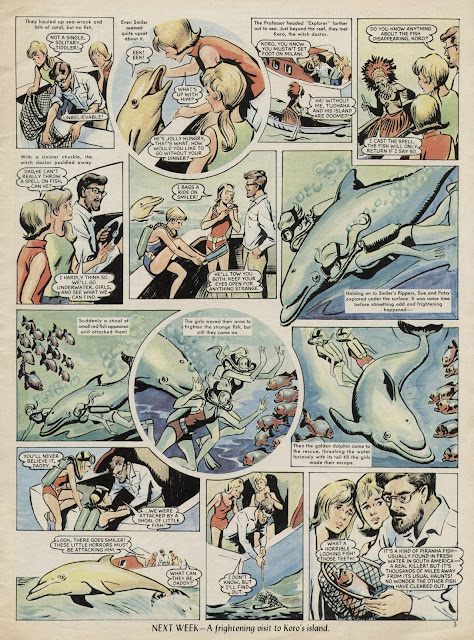 A few years back, DC published a new comic starring Will Eisner's The Spirit. Issue 20 saw The Spirit investigating the murder of a dolphin trainer at the local aquarium. 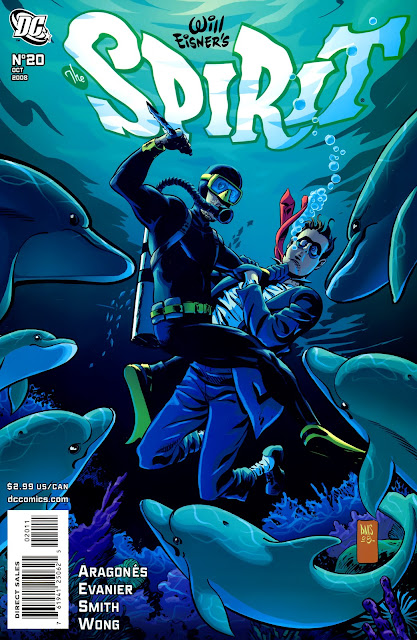 Discovering that terrorists are using the dolphins to recover dirty bomb components from the sea bed, our hero finds himself in trouble: 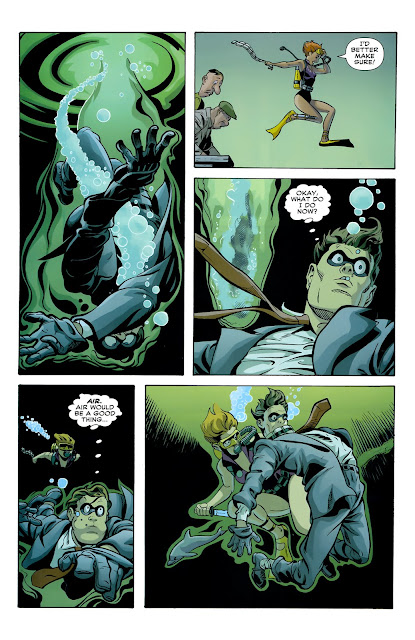 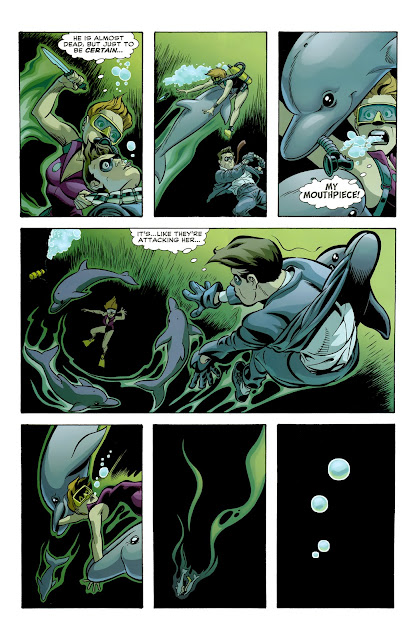 Artist Paul Smith (b.1953, inked here by Walden Wong) had no formal art training when he started working for Marvel in the 1980s. He's probably still best remembered for his run on X-Men at a time when that title was rising in popularity. Other notable runs include Marvel's Doctor Strange and Leave it to Chance for Image Comics.


The Dana Girls Mystery Stories were published by The Stratemyer Syndicate to cash in on the success of their Hardy Boys and Nancy Drew series. Teenagers Jean and Louise Dana were amateur detectives who solved mysteries while attending boarding school. All the books were credited to Carolyn Keene, the same pseudonym used for the Nancy Drew books. In this case the author was Harriet S. Adams. You can read more about the Dana Girls here.  Here's a selection of covers for The Secret of the Silver Dolphin: 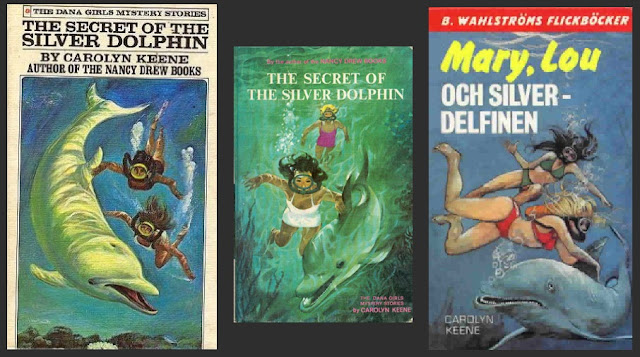 The most famous fictional dolphin must be Flipper who first appeared in the 1963 film of the same name. 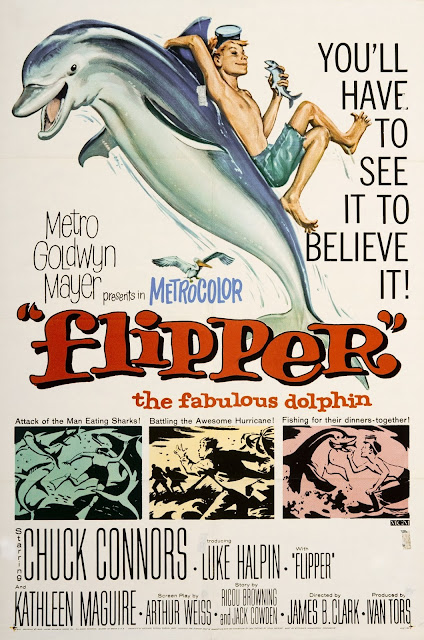 The film spawned a sequel and a TV series that ran for three seasons. The 1990s saw remakes of both the film and the series. Gold Key published three issues of a comic to tie in with the 60s series and I'll feature a story from one of those tomorrow. Lots of other merchandise appeared and here's the artwork from one of a number of jigsaws: 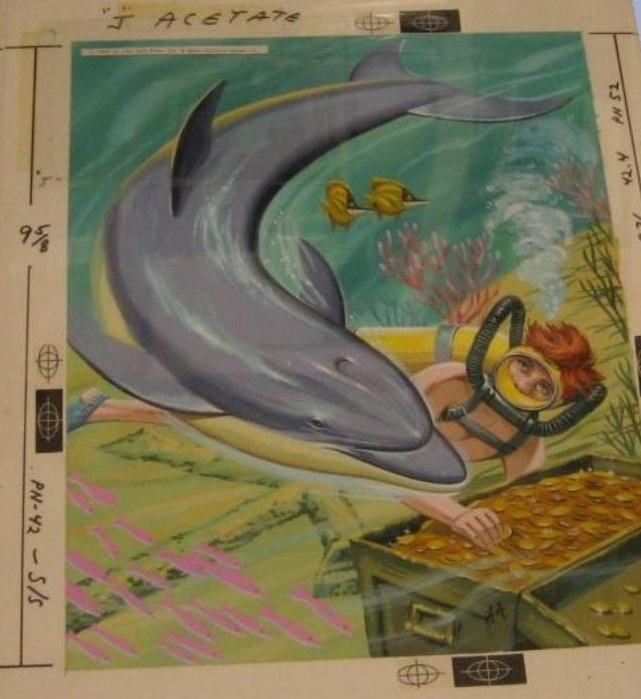 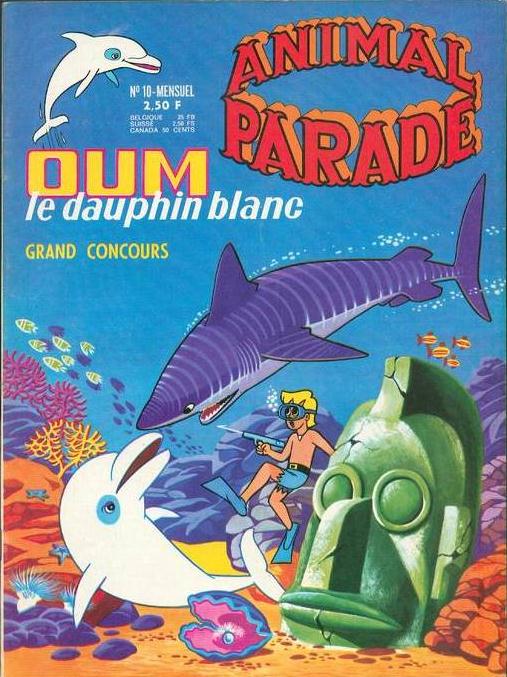 Nestlé's Milky Bar is known as Galak in many European markets and, instead of the Milkybar Kid,  Oum was used to promote the product until 2004. 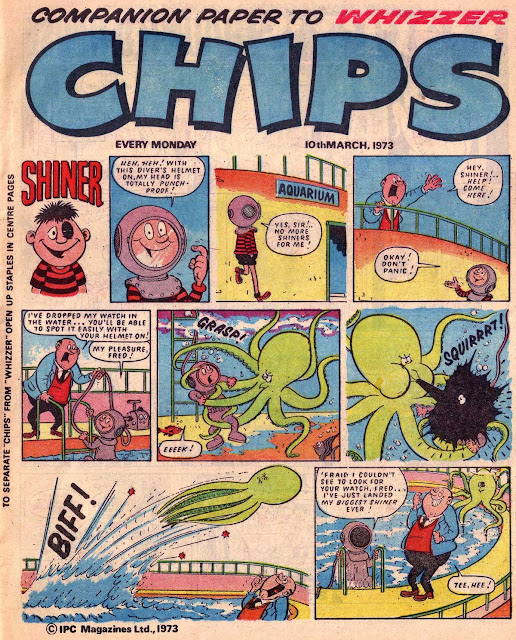