Before I bring you the conclusion of the Tomorrow People adventure that began in the previous entry, here are some details of Mike Noble's life and career.

Mike Noble was born on the 17th of September 1930 and grew up with a father and brother who both liked to draw. He attended South West Essex Technical College and School of Art studying  commercial art and also attended St. Martin's in London. At 17 he joined an advertising studio, his time there interrupted by his National Service. He found himself in the drawing office of the 8th Royal Tank Regiment.

In 1950, in search of more interesting work, he took a job at Cooper's Studio where he worked with Leslie Caswell, an artist known for his fashion and romance illustrations and who later drew strips for the Daily Herald. Noble's first strip work was Simon and Sally for Robin and at the same time he provided a weekly illustration for Life with Sally in Woman.

In 1958 he began drawing The Lone Ranger in full colour for Express Weekly. Initially a full page, it was later run across the bottom part of the centre pages. He continued to draw the strip when it transferred to TV Comic, this time in black and white line and wash with a single spot colour. He also drew another TV Western strip, The Range Rider, and, in something of a departure, Popeye and Beetle Bailey.

In 1965 he began his association with the worlds of  Gerry Anderson when he started working on Fireball XL5 for TV Century 21. In January 1967 he began work on Zero X, chronicling the ship and its crew that had appeared in the film Thunderbirds are Go. The following January he took over from Ron Embleton  on Captain Scarlet and the Mysterons. At this point TV21 had dropped it's newspaper-style photographic covers, instead devoting the space to the Scarlet strip. It has nothing to do with diving but I feel compelled to share this memorable cover from that run. 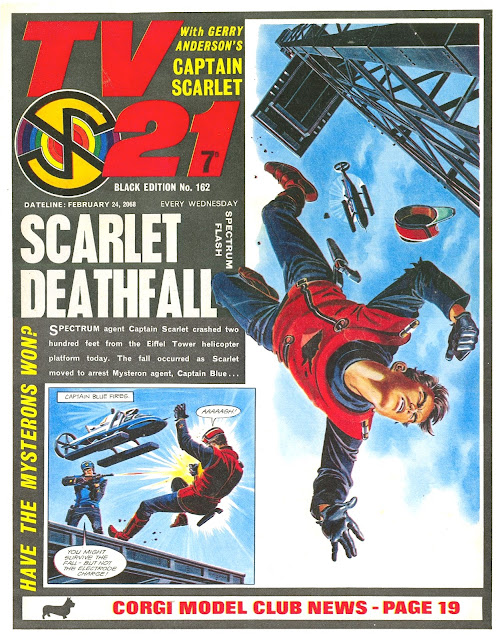 In October '68 he moved back to Zero X and remained on the strip for the remainder of TV21's original run (the strip actually finished in the penultimate issue).

In late 1969 and early 1970, he did some work for IPC. This included The Justice of Justine in Sally and Four Alone on the Abandoned Island for Cor!! The highlight of 1970 was a memorable six month run on Star Trek for TV21 which had been relaunched following a merger with Joe 90. For most of his run the strip occupied the front cover as well as two interior pages. January 1971 saw the launch of the "junior TV Times" Look-in which featured a mix of articles and comic strips.  Noble followed his former TV21 editor Alan Fennell to the new magazine and began an association that lasted for 15 years.

His first strip was the children's science fiction series Timeslip in full colour. His next strip, Follyfoot, showed off his skill at drawing horses which was also demonstrated in The Adventures of Black Beauty. This was the last work he produced in colour apart from a six week fill-in on Kung Fu. A typical two-page colour strip would take him six days to complete - two days each for pencilling, drawing and colouring. Unfortunately, the demands of nursing a sick parent meant he couldn't devote the time to producing colour work so for the rest of his time on Look-in he worked in black and white (early instalments of his final strip, Robin of Sherwood, were coloured by Arthur Ranson). Other work for Look-in included The Famous Five, The Tomorrow People, Space: 1999 and Worzel Gummidge.

Although he was now retired, in the 90's he produce occasional illustrations for the Gerry Anderson fan club Fanderson and various magazines produced during the renewed interest in Anderson's programmes. His most recent work included a poster for the Blu-ray release of Captain Scarlet and the Mysterons and an illustration for a forthcoming Captain Scarlet figure. Both of these were in collaboration with Lee Sullivan and you can read his tribute here.

An interview with Mike Noble.

And now, here's the conclusion of the Tomorrow People story. The laser cannon seen in this story is a typical example of Mike Noble Tech! 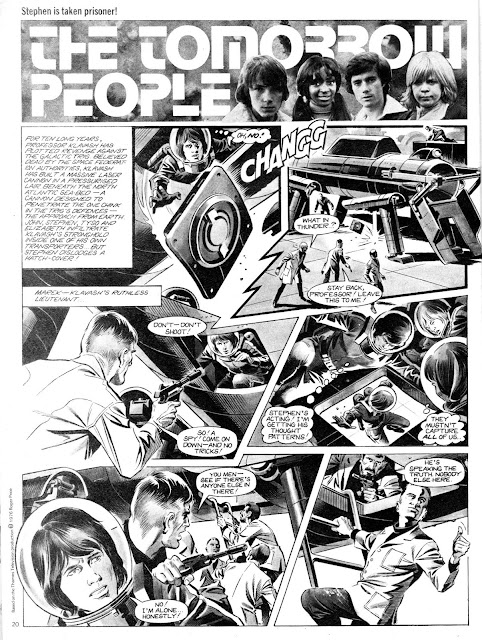 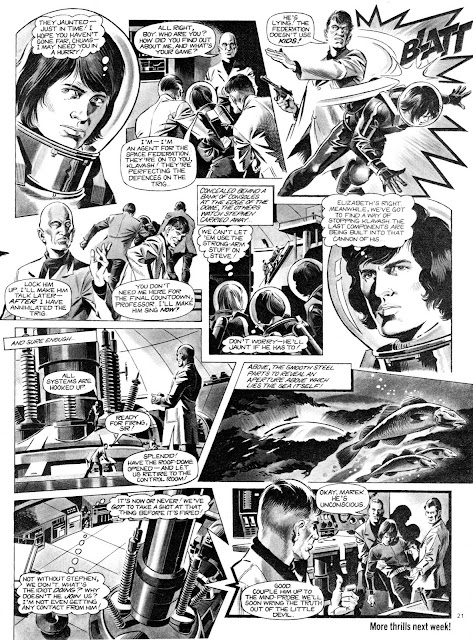 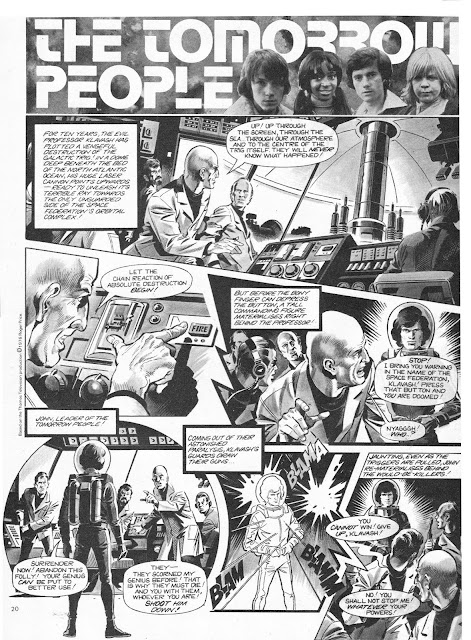 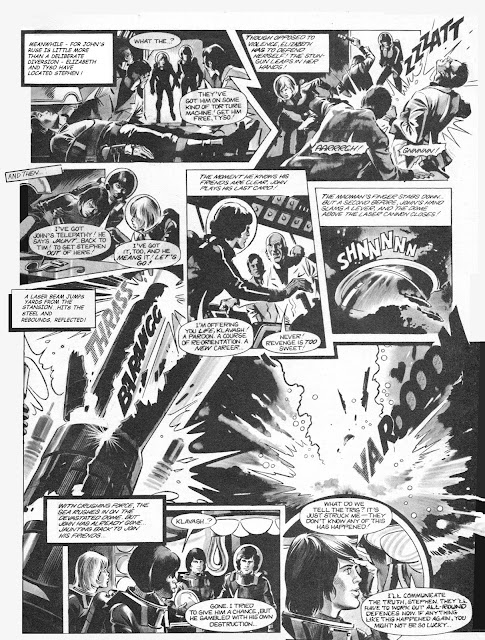 I promised a bonus strip yesterday and here it is. Enjoy! 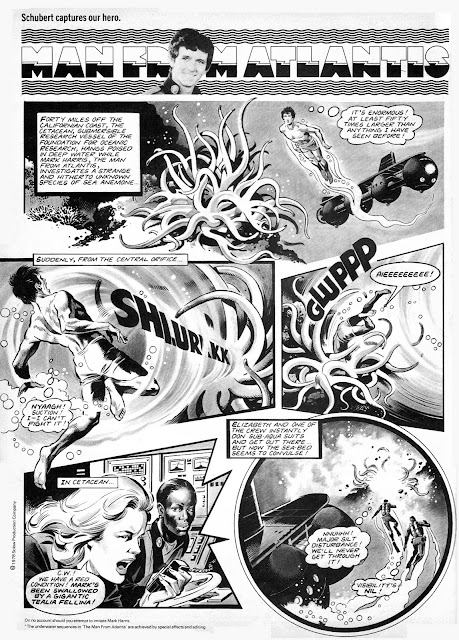 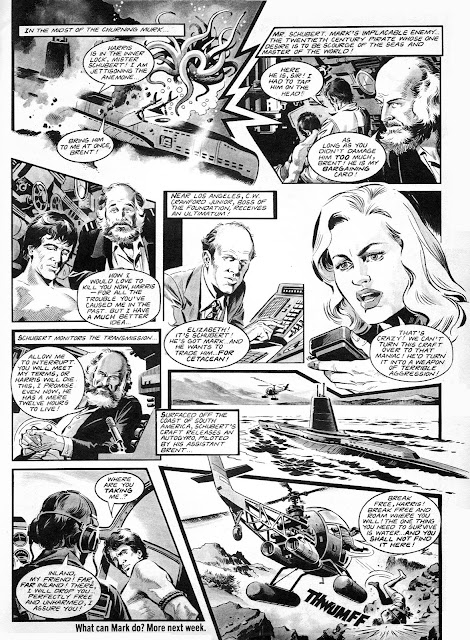 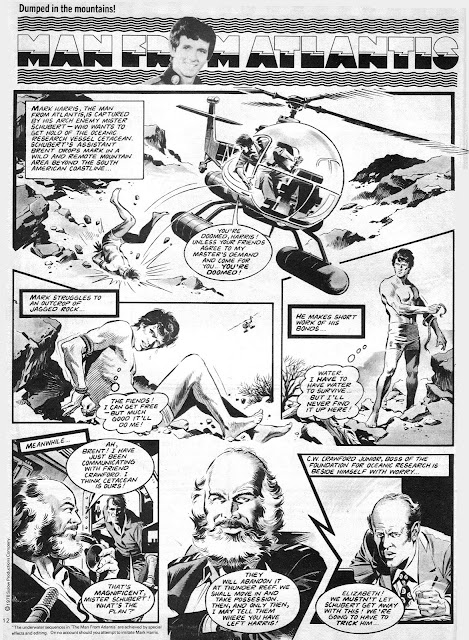 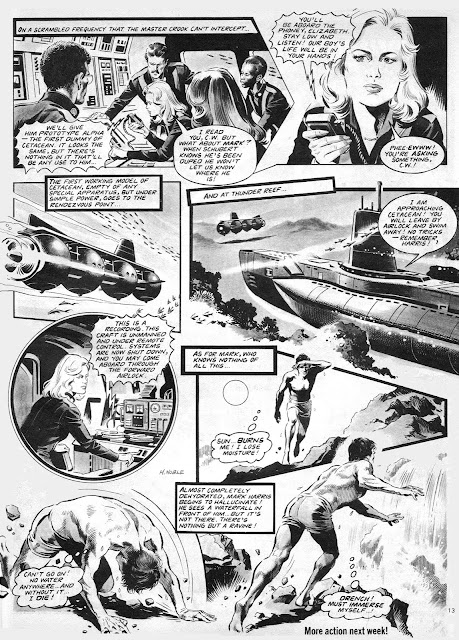 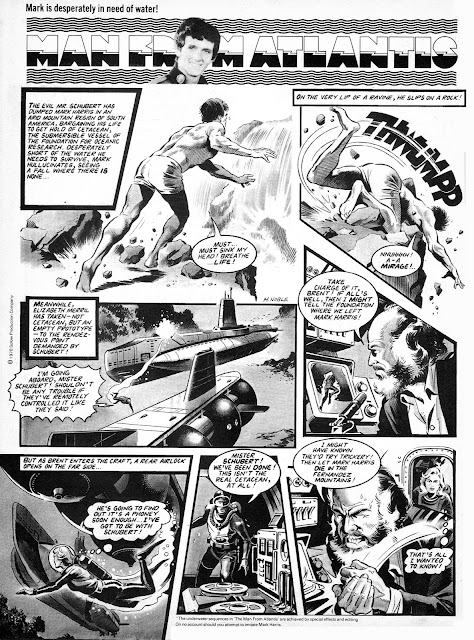 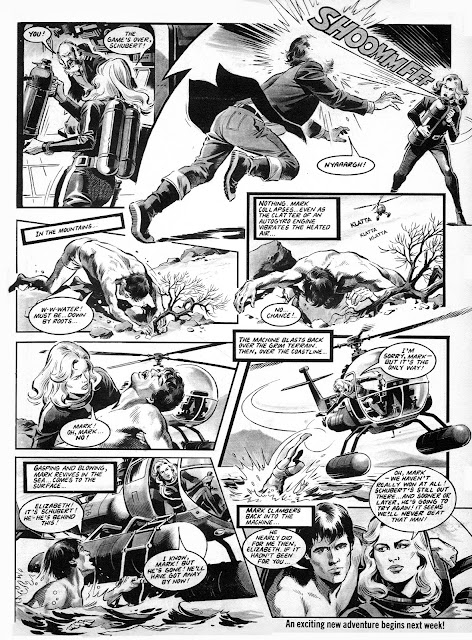