The Archie of Diving - Secrets of the Deep Part Two

Writer Dick Malmgren was clearly ignorant about Moray Eels. Not only are they not electric, I've never seen a bright red one either! Of course, so-called "Electric Eels" aren't actually eels at all but are in fact a type of Knifefish. I'm not sure how our bad guy, in his lovely stealth yellow wetsuit managed to capture and transport the specimen in the story without getting a shock himself! 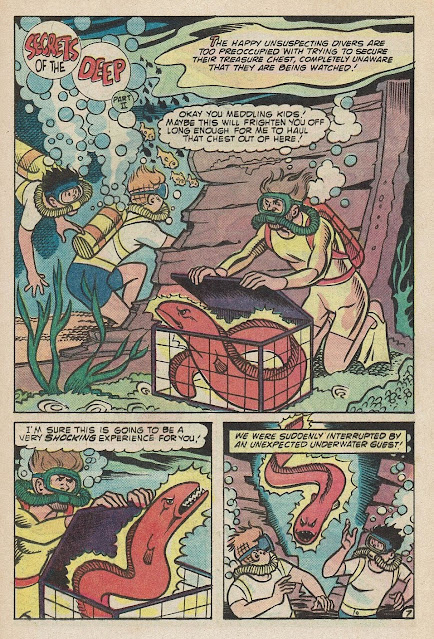 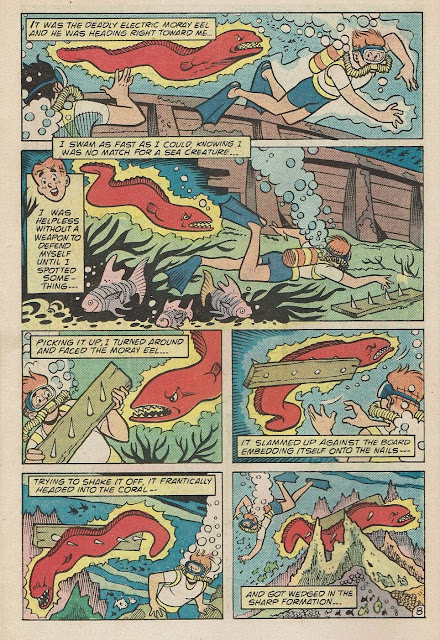 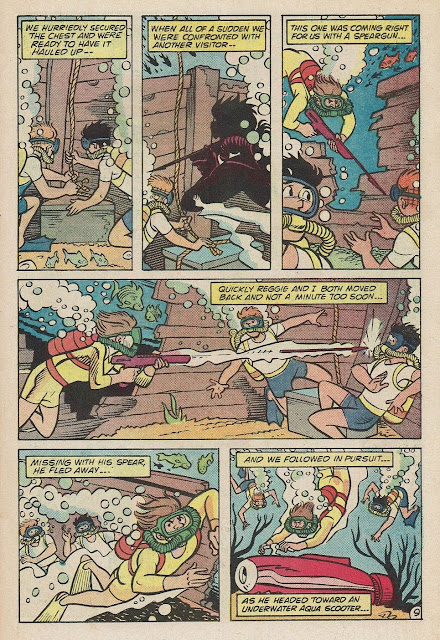 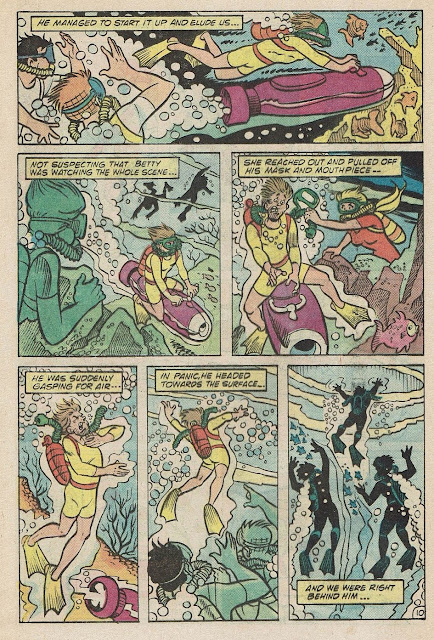 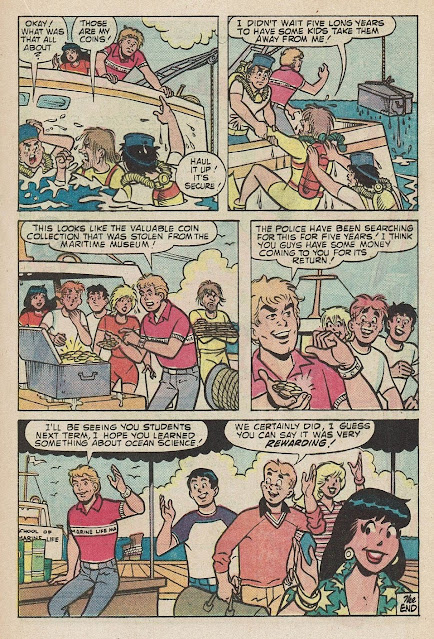 Stan Goldberg (1932-2014), aka "Stan G", was just 16 when he began working for Marvel's predecessor Timely Comics in 1949. He worked in the colouring department under future Archie colleague Jon D'Agostino. Within a couple of years he was the department manager as Timely became Atlas Comics. He also drew some stories for Atlas' horror comics and attended evening classes at the School of Visual Arts.
In 1958 he went freelance but continued colouring as Atlas became Marvel Comics. He worked with Jack Kirby and Steve Ditko to create the colour designs for the likes of Spider-Man, The Incredible Hulk and the Fantastic Four. He also worked as the artist on humour books such as Kathy and Millie the Model, adopting the style established by Dan DeCarlo. He also drew in a more dramatic style when Millie became a romance book for several years. He stopped working for Marvel in 1969 and spent three years working on DC's teen humour titles.
Around this time he also began his long association with Archie Comics, once again adopting the house-style established by Dan DeCarlo. He worked across the companies range of titles, eventually becoming the main artist on their flagship comic Archie. He drew the Archie Sunday strip from 1975 - 1980 and also drew the Archie/Marvel crossover Archie Meets The Punisher. His final work for Archie appeared in 2010 and he then worked on graphic novels featuring Nancy Drew and The Three Stooges. In 2012 he was awarded the prestigious Gold Key Award from the National Cartoonist Society. He died following a stroke at the age of 82.
Charles "Chic" Stone (1923-2000) studied at the School of Industrial Art and, like Stan Goldberg, he was just 16 years old when he broke into comics. He initially apprenticed at the Eisner and Iger Studio before going on to work for Fawcett (Captain Marvel), Lev Gleason (Boy Comics) and Timely (Blonde Phantom and others). During the 1950s he worked as an art director for magazines, worked in advertising and produced storyboards for TV commercials.
In the 1960s he returned to comics, initially working for AGC and DC. He then moved to Marvel where his work included inking Jack Kirby on Fantastic Four, The Avengers and Journey into Mystery (Thor). Towards the end of the decade he began freelancing for DC again, pencilling the occasional Batman story as Bob Kane, and also worked for the short-lived Tower Comics. In the 70s and 80s he worked for Archie Comics on their Red Circle and Archie Adventure Series lines as well as the humour titles. He continued to work into the 1990s producing commissions in the classic Kirby-Stone style.
Posted by Robert Moubert at 6/08/2021 09:00:00 am