The Extra Special Art of Diving

When the first issue of Eagle was published in April 1950, tucked away at the bottom of page five was a strip called Captain Pugwash which was written and drawn by John Ryan (1921 - 2009). It was considered too young for the readership and was dropped after only 19 issues. That was not the end for the good captain however and he later appeared in other comics, books, the Radio Times and, most famously, a BBC series that used cut-out figures and real-time animation.

Despite the "failure" of Pugwash, the editors of Eagle obviously liked Ryan's work and a new strip appeared in issue 16 and ran for the next twelve years - Harris Tweed, Extra Special Agent. Tweed was a bumbling, accident-prone M.I.5 agent who usually managed to come up trumps thanks to his unnamed young assistant who was only ever referred to as "Boy". These two examples from 1957 show Tweed and the boy in some underwater action (click for larger images). 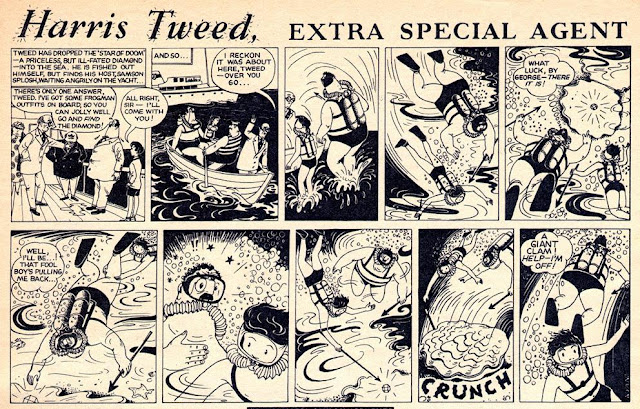 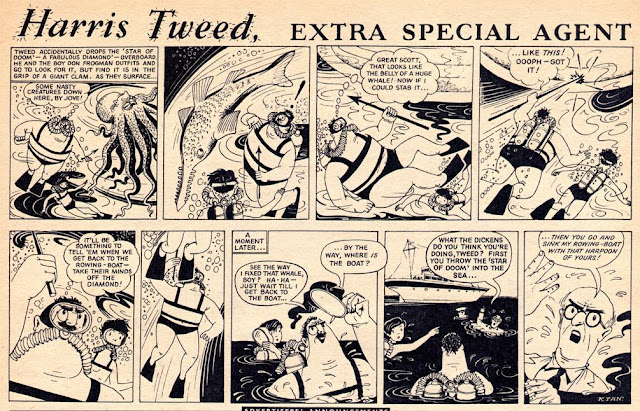 John Ryan also created Lettice Leef, the Greenest Girl in the School for Girl (and later Princess) which ran for 15 years, and Sir Boldasbrass for Swift. His other TV work includes The Adventures of Sir Prancelot and Mary, Mungo and Midge.
Posted by Robert Moubert at 8/07/2016 04:58:00 pm